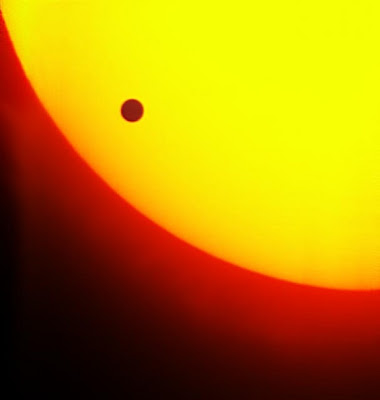 It's a twice-in-a-lifetime thing, today's passing, or transit, of Venus across the face of the Sun.  The last time it happened was eight years ago, and after today it won't happen again for more than 100 years (and this pattern -- two transits about eight years apart, with each pair of transits separated by more than a century -- is exactly how it has always been, and will be).


So hold tight from 3:07 p.m. to almost 9:30 p.m. Pacific Time (and at the same corresponding time elsewhere) today.  Assuming clear skies, proper geographic location (click here and use the options to see where you fit in), and the right eye-wear (or access to a computer webcast like the one found by clicking here), Venus "will appear as a small black dot gliding across the disk of the sun."  And Venus's glide will have a royally exquisite pace: given its six hour plus total transit time, the planet from our earthly perspective will slowly inch across the face of the sun.

Wow!  The rareness and balletic beauty of today's cosmic synchronicity excites my mind and passion.


And so  so too does the event's poetic energy.  The Sun and Venus pack elemental symbolic power;  at their metaphoric cores, they are fiery life and love, respectively, and each has been so associated for a long, long, time.  When such potent tropes come together, especially when that happens but twice-a-century (including today!), getting giddy just can't be helped.  And I also feel inspired by today's transit of Venus across the Sun: I'm ready and even full of lust for any and all unexpected pairings or unusual juxtapositions.  Poetry, do thy thing!


And in addition to all that, today's also the exactly right and perfect time to specially celebrate a book of poetry named after the celestial event: Harry Crosby's Transit of Venus (Paris: Black Sun Press, 1928, revised editions 1929 and 1931). 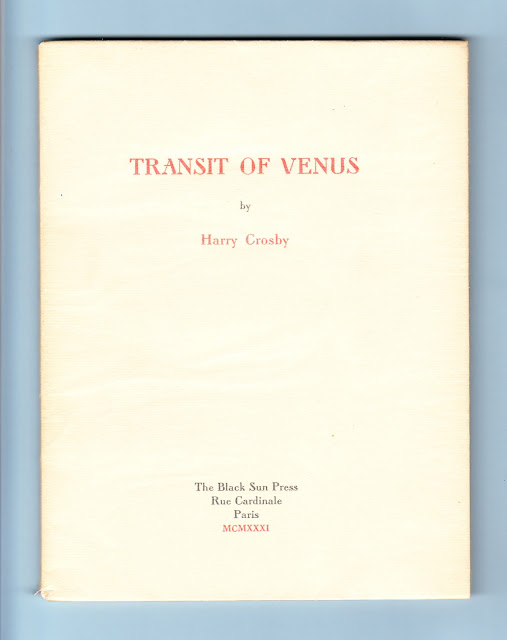 If you don't know about Harry Crosby, Wiki-P could be consulted (click here).  Also on-line is a well-chosen cache of material at the Modern American Poetry site (click here for that).

Best of all would be to buy (many copies available for less than $10 including shipping) and read Black Sun (New York: Random House, 1976), Geoffrey Wolff's classic biography of the man.  Crosby's adult years included a stint as an ambulance driver in World War I, a ditching of Boston aristocratic life for expatriate high (and sun-worshiping) times in 1920s Paris, the founding (with his wife Caresse) of the important Black Sun Press, work on the avant garde magazine transition, and the writing of his own poetry.  His  life ended in December 1929 with what has been called a murder/suicide and/or suicide pact; the victim Josephine Rotch, shot by Crosby in a New York hotel room a few hours before he shot himself, was one of his lovers. Wolff's account of Crosby's life is superb, and his speculations and assessments are reasonable if not always entirely persuasive.

As I alluded to about three years ago when discussing a couple of Crosby's wildest dardanic poems (click here and scroll about half way down the post), I came to his work via Philip Lamantia, who greatly enjoyed and championed Crosby's rebellious surreal-tinged Mad Queen (1929), a book of "tirades" (there's much in the poetry that pointedly attacks Boston culture).  It's definitely an under-appreciated American classic, and a primary reason why Crosby as a writer holds special appeal for me, even as most tend to categorize him as a minor poet.

The poems in Transit of Venus were written in the weeks following July 9, 1928, when Crosby first met and began his affair with Josephine Rotch, who would eventually die with him.  Crosby at the same time had been reading about the sun;  the July 5, 1928 entry in his diary (published as Shadows of the Sun) -- lists approximately three dozen facts about it that he'd learned.  Crosby, in his first diary entry about her, called Rotch "the Youngest Princess of the Sun!"  In the August 21, 1928 entry, he explained, "Decided to call my new book of poems Transit of Venus -- Venus being the Youngest Princess of the Sun.  But  occasionally at her inferior conjunction Venus passes directly across the disk of the Sun the phenomenon being known as a Transit."

Although Transit of Venus does not have the overall unconventional outlandishness and verve of Crosby's Mad Queen, it does have plenty of intensity and many memorable moments.  Among its approximately sixty short poems (almost all are shorter than a half-page) are about a dozen that I always enjoy reading again, including the handful below that I present here today for our celebration.
The first poem in Transit of Venus is rather conventional, but importantly -- especially today -- it explicitly ties the astronomical phenomena of the book's title to the poet's new romance (and in fact is the only poem in the book that alludes to the transit):


Several poems in Transit of Venus take a stuttering approach with at least some of their lines, featuring more-or-less incomplete phrases that seem to suggest a world of fragmented perceptions or thoughts  It's a mode that seems to fit within the experimental verse of the era, and at times still feel that way today.  Here are three examples:

A shade,
A starless night,
Death,
Of death, darkness and the
Of some unseen power,
Thy wings under the
On the wall
Of evening, let me call
Shadows of a thought in green
Shadows I have seen.

Tall ancestral
Tongues in
Unto the root of
Dark-fingered
As the needle to the pole
As the shadow to the sun
Fungi and mushrooms
And the root of the tree
Dark-fingered
Thrusting into
Infinity.

This blessed fruit, this,
This goodly red,
This fire, this O, this,
This is the last of
This kiss.

I really like that "Shadows of a thought in green" line in the first of these three poems.  Crosby was a deep reader of poetry, so it'd not surprise me if he purposefully echoed there the "green thought in a green shade" line of Andrew Marvell's "The Garden" (click here to refresh your recollection, if you please).

I also really like the last poem in this bunch.  The staccato in that one serves a mimetic purpose, effectively transmitting the rhythm, the passion, of the lovers' extended kiss, a kiss that's a series of mini-kisses, some long, some quick, some deep, probing here, lingering there -- well, you know how that works, don't you? -- with the commas signifying the pauses between each part, and the whole possessing a most dynamic and arousing intensity. Yes? Yes!

Even when he is more-or-less conventional, as he can be in Transit of Venus, Crosby almost always drops something interesting into his lines.  Consider:

New Every Morning
All brightness like an orchestra of swords
All flashing messages of joy
All gay as ladies with their lords
Meteor with comet spinning spun
New every morning with the sun.


This, a brief lyric on the freshness each day brings, is very traditional in form and subject.  Yet that second line simile, "All brightness like an orchestra of swords," surely isn't typical or tired.  It's close to, maybe is, a surreal image, and memorable for that reason.  The image's freshness also of course conveys exactly what Crosby wants to suggest about the newness of every morning.  Memorable too is the next to last line of the poem, the way it doubles the not-of-this-world objects (the nouns meteor and comet both) to suggest unexpected abundance, and then puts those objects in a kind of time-traveling action whirl with its initially awkward sounding yet ultimately alliteratively smooth back-to-back present participle / past tense verbs ("spinning spun").

I'll end this celebration -- and here's wishing you a fantastic transit of Venus / Transit of Venus day today! -- with the next-to-last poem in the book.  I like its on-the-sleeve ecstatic affirmation of exact in the instant accuracy:

One little
One golden
Of bliss wingéd
With flying feet
One vision golden
Of the sun and the sea
One precise moment
Of clarity. 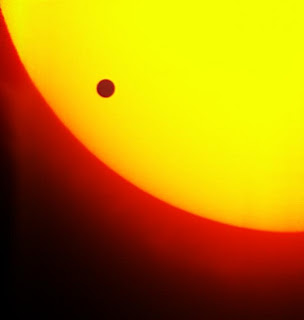