The Rule of Law
If you don’t know Czeslaw Milosz’s life-story and work, including his poetry, now might be a good time to get curious. And if you do know Milosz’s writing, then maybe it’s time to read it all again. You see, it’s the centenary of his birth (born June 11, 1911 / died August 14, 2004); among other events there’ll be a celebration the week of March 21st in New York City (click here), and – hey what do you know! – I’m back in the glade here today to give a more personal (and perhaps idiosyncratic) shout-out.

Milosz, to cover the basics, was a poet, writer, and professor (Slavic Languages and Literature) at the University of California, Berkeley. Awarded the Nobel Prize in Literature in 1980, the key biographical fact is his emigration to “the West” (first France, then the United States) after World-War II when his homeland (Lithuania-Poland) came under the control of brutal and repressive totalitarian forces (first Hitler, then Stalin).

Milosz wrote poetry, in Polish, starting in the 1930s, but first attracted substantial notice here with the early 1950s publication (in English) of The Captive Mind. The book examines the challenge – the impossibility, for him – of creative and intellectual thinking and work in a society marked by centralized, arbitrary, and highly politicized authority with its concomitant explicit and de facto restrictions on the individual. Here’s the front cover of the true first edition (London: Secker & Warburg, 1953): 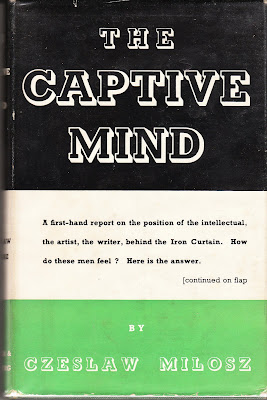 Among the supremely persuasive sentences in The Captive Mind is the following rather direct explication – and surely Milosz was in a position to know – of the importance of what I’ll call the rule of law for limiting the power of those in charge:

To seize a man on the street and deport him to a concentration camp is obviously an excellent means of dealing with an individual who displeases the administration; but such means are difficult to establish in countries where the only criminal is the man who has committed an act clearly defined as punishable in a specific paragraph of the law.

Milosz elaborated on his ideas on the importance of the rule of law, and did so in a poetic way, in his essay “Emigration to America: A Summing Up,” first published in Polish in 1969 and included, in an English translation, in the excellent prose collection Visions from San Francisco Bay (1982). In this passage, Milosz’s unabashed verve and enthusiasm for the rule of law grabs me hard, and I think the same happens with just about everyone who reads it. How about you? Here we go:

People who have preserved the capacity for awe are rare – people who can, for instance, still be awed by the earliest, basic human discoveries, like the striking of fire and the shaping of the wheel. No less amazing is the idea that the power of the state should have limits prescribed by law and that nobody should be thrown in prison on the whim of men in uniform. Especially because, while the wheel is here to stay, the protection of law as secured by an independent judiciary is constantly being threatened by the ambition to rule others without any obstacles or checks. 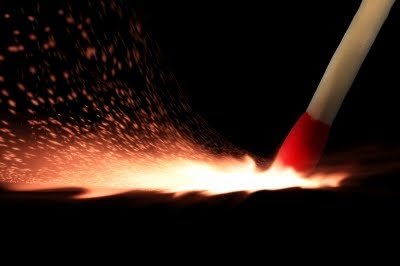 “the striking of fire” 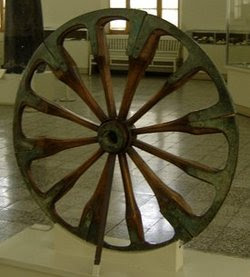 “the shaping of the wheel” 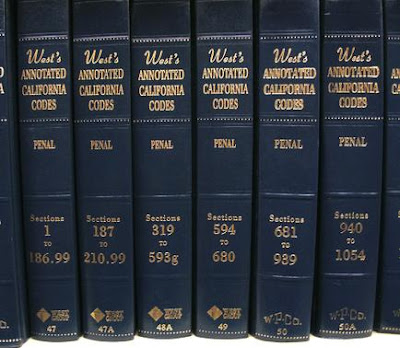 “the only criminal is the man who has committed an act . . . 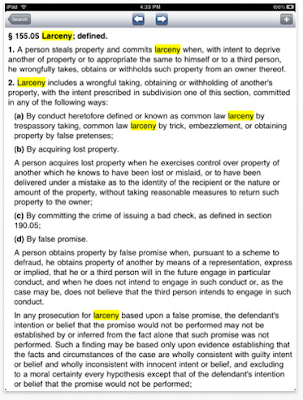 clearly defined . . . in a specific paragraph of law”
I’ve long held dear the Milosz-ian awe for the rule of law, and have especially thought about it over the last several weeks and months. The importance of limits on centralized government authority, of the kind Milosz writes about in the excerpts above, seems at the core of the mass uprisings in the Middle East, where unchecked state power has long been the norm (see for example the LA Times article here, alluding to Hosni Mubarak’s security forces having plucked Egyptians from the street and vanished them in an instant).

More acutely – since it more directly involves where I live – Milosz’s words come to mind in connection with “the new detainee cases” now pending before the U.S. Supreme Court (click here for the legal low-down, if you please). These cases, brought by those with last names that include Khadr, Kiyemba, and Al-Bihani, challenge the indefinite confinement at Guantánamo Bay “Detention Camp” (some have been locked up for almost a decade now). The detainees have been imprisoned because they are considered a threat, not because they, to use Milosz’s words, “committed an act clearly defined as punishable in a specific paragraph of the law.” 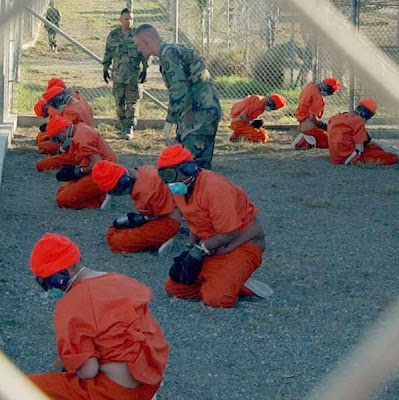 Detainees at Guantánamo Bay, January 2002
The disturbingly harsh conditions at Guantánamo – I say it’s torture – only make me think harder on what Milosz wrote. So too the fact that America indefinitely holds others at Bagram Airfield outside of Kabul, Afghanistan (and reportedly elsewhere as well). Guantánamo and Bagram seem another sad example – see also Executive Order 9066, signed by Franklin D. Roosevelt on February 19, 1942, and the upholding of that totalitarian act by the Supreme Court in Korematsu v. United States (1944) – in which America has turned its back on the rule of law, and surely not feeling any Milosz-ian awe toward that fundamental necessity of organized social-political society that truly values the individual.

+(+)+
I’ve read pretty much all of Milosz in English, and unless I’m forgetting something his views about the rule of law and limiting the power of the state, while clear in his essays, aren’t explicitly set out in individual poems. Milosz could be direct, even didactic, in his verse, but generally he does so (with a winning intellectualism and humbleness, I must add) regarding matters of philosophy, emotions, or poetics, not politics or political theory.

The following poem, however, comes to mind, and stays there, when I think about Milosz’s views on the rule of law and in particular his sentence, quoted above, about awe for the “earliest, basic human discoveries like the striking of fire and the shaping of the wheel” (and thus for the rule of law, which he finds “no less amazing”). The poem, a remembrance and celebration in verse of things past, was first collected in Provinces (1991), translated by Milosz and Robert Hass, and here it is:

I liked the bellows operated by rope.
A hand or a foot pedal – I don’t remember which.
But that blowing, and the blazing of fire!
And a piece of iron in the fire, held there by tongs,
Red, softened for the anvil,
Beaten with a hammer, bent into a horseshoe,
Thrown in a bucket of water, sizzle, steam.

And horses hitched to be shod,
Tossing their manes; and in the grass by the river
Plowshares, sledge runners, harrows waiting for repair

At the entrance, my bare feet on the dirt floor,
Here, gusts of heat; at my back, white clouds,
I stare and stare. It seems I was called for this:
To glorify things just because they are.

I love this poem, although with one reservation. But before the objection, the praise: as an expression of awe, this poem is (forgive me) awesome. I love the details, especially those (and particularly “sledge runners, harrows”) uncommon here in 21st century coastal California. I love too Milosz’s humanness, which saturates the poem with sensuousness and moments we can all identify with (see especially the second line, in which Milosz admits not remembering exactly).

Also lovely is how the poem begins as – and remains always – a memory (“I liked...”) yet repeatedly zooms to RIGHT NOW, as at the end of the first stanza when “a piece of iron,” first “held” has by the end of the sentence, in a feat of grammatical presdistigation come right to the present, with “sizzle, steam.” The same happens in the final stanza too, I think: “Here, gusts of heat; at my back; white clouds,” set forth as if it was happening this very instant.

What I don’t like much in the poem is the final line and one-half: “It seems I was called for this: / To glorify things just because they are.” This seems iffy, if you’ll allow me a readerly questioning of a Nobel Laureate’s work. There are some, probably many, who applaud this direct declaration of poetic purpose (see here, for example), and it’s hard to deny the power of Milosz putting it out there as he has here.

But more often I wish he’d not included that final sentence. I think the point, his sense of a mission to “glorify things just because they are” is made very, very clear by the lines that come before, in which does masterfully does just that. Personally, I think eliminating the final declaration, so that the poem ends with “I stare and stare” or with that sentence re-lineated so that on the page it goes something like

– to s-t-r-e-t-c-h it out with no terminal punctuation so that it suggests a long, never-ending reverie. That, I think, would have been very, very cool. On top of that, the “I stare and stare” phrase has wonderful, maybe even triple, ambiguity. Is Milosz telling us here about staring at the scene at the blacksmith shop back in the day? Or what he’s doing now staring back at the vivid memory? Or what he does now as he looks at the words just written in the poem (and why wouldn’t he “stare and stare” at his lines? I certainly do!). I enjoy the multiplicity of “I stare and stare” and think ending the poem with those possibilities would have made it stronger, to me at least, compared to its buttoned-up and neatly packaged declarative conclusion.

But still and again, the awe here in “Blacksmith Shop,” especially since it centers on the elemental (fire, the shaping of iron) that brings me back to Milosz’s point about awe for the rule of law, is awesome. I can’t say enough about that, even here on this puny and way too irregular blog. Happy 100, Czeslaw Milosz! 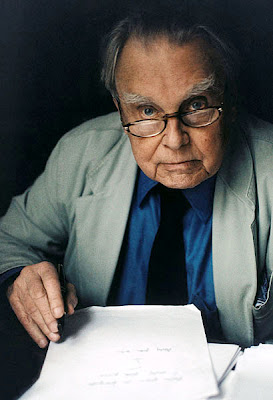 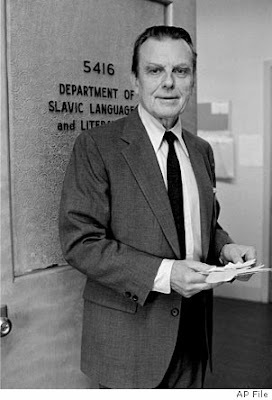 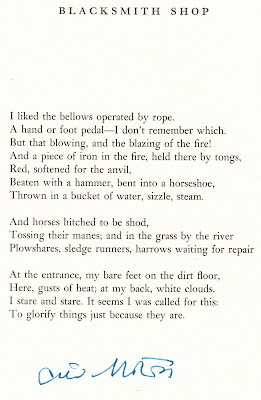