Gather ‘round people, a shelterin’-in-place (or not), as today’s the 93rd anniversary of the birth – on October 23, 1927, in a home on Sanchez Street, San Francisco – of Philip Lamantia.

So Yes! and Hey Now!, Let’s Celebrate, and Cerebrate!  How about we read, and think a bit about, one of his many fine poems?  Here we go:

Am I happy? Were I happy!
Zoos of happiness converge
on horrors which is a wide paw
of who calls first from
the lip’s underscore
Happiness not a constant state
The field of man’s gore
makes bones shine further
to the suicide machine
We make the sacrifice tree grow
for its necessary leavens
burnished with an ecstatic smile
of pain — the oscillations escalate —
not a moment of happiness but
contradicted by the black undertow
What, then, is coming to be
from undergrounds too fast
in their bright plumages
flailing our brains
with the gash of birth?
Something storing mercurial islets
and fungi of being . . .
and sold for altars
pitched to the stars!

“After the Virus” – a title that for obvious reasons caught my attention while re-re-re-re-re-etc-reading Lamantia during the present pandemic – was first published in the “Secret Freedom” section of Selected Poems (City Lights, 1967), along with fourteen other previously uncollected and mostly unpublished poems, all written, per the book’s Table of Contents, between 1963 and 1966. 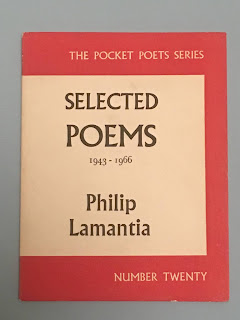 All this work, of course, is also available in The Collected Poems of Philip Lamantia (University of California Press, 2013).

There’s a winning verve and singular (if I may say it like this) unusual-ness to all work in “Secret Freedom.”  With regard to its unusual-ness, one of the poems is titled “What Is Not Strange?” while another has an one word exclamatory title – “Gork!” – followed by, count-‘em, an eighty-five word sub-title.  As to ardent enthusiasm – remember here William Blake’s “Exuberance is beauty”  –  consider the fervent way-out optimism of the inspiriting declaration in “She Speaks the Morning’s Filigree”: “We can play host to the marvelous / and have it burn us to the salt of memory / where an invisible stone contracts all thought / to draw out our words / that shall crackle your sleep / to wake us up beyond the Pleiades”.

Also, a fresh mid-1960s wind invigorates the “Secret Freedom” poems.  Tellingly, one of them, “Astro-Mancy,” first appeared in a 1967 issue of the quintessential hippie-era newspaper, The San Francisco Oracle.  In that poem, Lamantia, quite in tune with those heady times (or did he play the music to which others then sang?), foretells “essential changes”  including “The Realm Apart” (italics in original) where among other things “poetry [is] the central fact.”  There are also plenty of esoteric allusions, some of which  t can challenge, including because they are in part imagined, such as the reference to “the Giant Chairs of Tartesos” which I take (this largely a guess) alludes to Tartessian BCE thrones, which, so far as I can learn, have not survived but are known to have been supported by two foot tall bronze sculptures of winged felines.

Finally, and probably most important, Lamantia during this period returned to his surrealist roots, so there’s an authentic automatism in the poems.  Parts of “After the Virus” show this, I think.

As I read it, “After the Virus” concerns the emotional and  physical state, as well as the psychic mindset, just after an illness or perhaps while still sick but trending towards recovery.  The nature of the illness is not specified – see conjecture below – but the poem’s opening question – “Am I happy?” with its almost rueful self-answer “Were I happy!” clearly indicates that Lamantia – the presumed speaker here – is not 100 percent well, to say the least, although that the response comes with a mark of exclamation suggests there’s some energy there as well.

The memorable lines that follow suggest more specifically what’s going on: “Zoos of happiness converge / on horrors which is a wide paw / of who calls first from / the lip’s underscore”.  The words connote a state that’s wild, varied, penned-in as well as frightening, nightmarish, frantic, immediate, and well-entrenched or emphatic.  It’s quite an image, or series of them.

There then follows a broader philosophical suggestion –  “Happiness not a constant state” – which is given a stunning visceral twist by the lines:

Lamantia’s suggestion that happiness is not always with us, especially when coupled with  images that suggest blood, skeletons, mechanized self-harm and death–, reminds me of the  scene in Samuel Johnson’s Rasselas, in which the title character envies life in Europe but is counseled by his guide, Imlac, that “[t]he Europeans . . . are less unhappy than we, but they are not happy. Human life is everywhere a state in which much is to be endured, and little to be enjoyed.”

The poem doesn’t go as far as Imlac’s pronouncement; Lamantia seems to suggest not that sorrow almost totally predominates, but that joy and sorrow co-exist, are ever-present companions, always in tension.  In this regard, the poem a  few lines later, references “. . . an ecstatic smile / of pain . . .” (does Bernini’s Ecstasy of Saint Teresa come to mind?) – 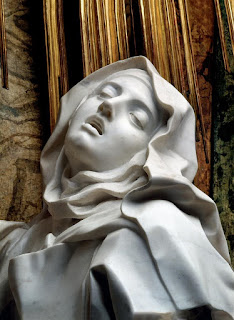 – and then, a few further lines down, directly declares, “not a moment of happiness but / contradicted by the black undertow”.

The repeated, emphatic insistence that “horrors,” “pain,” and “the black undertow” co-exist with happiness or ecstasy may well reflect that Lamantia, to borrow the words in “High Poet,” the magnificent introductory essay to The Collected Poems, “struggled with a lifelong manic-depressive condition” marked by periodic “intense manic episodes” and “cycles of depression.”   This mental health condition is reflected in many of Lamantia’s poems, and he occasionally explicitly references it.   In “Invincible Birth,” for example, published in Meadowlark West (1986), he speaks of “my frenzy mantic mania,” and the late 1980s “No Closure” includes, “[f]or I have, as the poet Cowper, known 3 cycles of  “depression” cursed by my own line /  “. . . fallen into the goblet of suicide . . . ”.

Given all this, perhaps the “Virus” in “After the Virus” is not a submicroscopic infectious agent, but shorthand for the manic-depression which plagued Lamantia.  It seems quite possible.  It’s also possible, I suppose, that the  “virus” of in the poem is something that infects society at large.  Lamantia never held back his strong views of the ills of the world; other “Secret Freedom” poems, for instance, indict the “monster metal cities / and their billion, bullioned wheels of chemical death” (“Voice of Earth Mediums”) and declare that “[t]he old civilization / that rolled the dice of Hitler / is surely bumbling / into a heap of catatonic hysteria” (“Astro-Mancy”).

But perhaps in addition to the personal and global, an actual viral illness was involved here too – or solely so.  Ah, I wish I could ask Philip, but alas, he’s now gone – this seems impossible – 15 years.

The powerful exploration of the relationship of happiness and pain in the poem’s first fifteen lines is followed by nine concluding lines in which Lamantia, as I read it, prophesizes what’s to come from where he’s at, a state in which “oscillations escalate.”  This prophecy is told in a question-and-answer format:

What, then, is coming to be
from undergrounds too fast
in their bright plumages
flailing our brains
with the gash of birth?
Something storing mercurial islets
and fungi of being . . .
and sold for altars
pitched to the stars!

That is one far-out Socratic dialogue, or perhaps better said, one very deep or may I suggest one very high and surreal catechism.  In the end, what Lamantia asks and answers – what he sees – is probably one of those matters for which “[e]xplanations are neither necessary, desirable, or possible,” to borrow the words written by the early 20th Century California poet and weird tales author Clark Ashton Smith, whose work Lamantia knew and liked, see Preserving Fire: Selected Prose (Wave Books, 2018) at 127.

While a definitive explication here is beyond the reach of reason (and hurrah! for that), the combination of images beguiles and intrigues.  To say it another way, the “Something” that is “coming to be” – with its suddenly and unpredictably changing small islands (or does “islets” refer to biologic cells?) and ’shrooms of existence, which then are sold as a  ritual furnishing aimed at the titans of the universe (and remember, Lamantia was a star-lover of, er um, stellar dimensions) – enchants.

I say, let Lamantia’s “Something” come to be!

The last four lines of “After the Virus” are a particularly formidable  reverie-generator, and as such you and I – us readers – create in a way similar to Lamantia when he wrote it.  The images also remind, to quote Gaston Bachelard, that “great poets teach us to dream.  They nourish us with images with which we can concentrate our reveries of repose.  They present us with their psychotropic images by which we animate our awakened oneirism.”  The Poetics of Reverie (Boston: Beacon Press, 1971) at 158. 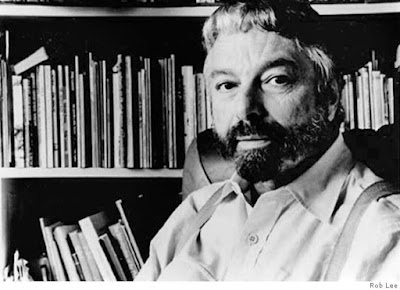