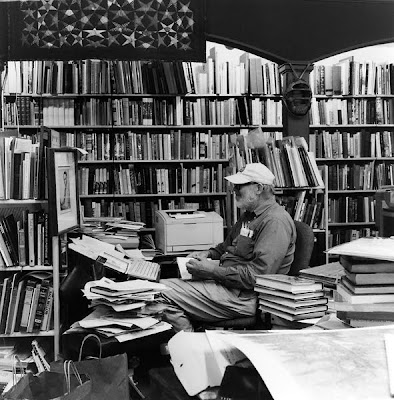 I met Peter Howard sometime just before 1995. I was looking for a book of poetry, Langston Hughes’ translation of Gabriela Mistral. Why exactly that book, I can’t really remember (so much poetry, so many years), but somebody told me to check with Peter Howard, at Serendipity Books on University Avenue in Berkeley, and I did. He had the book, I bought it, and that was, as the movie puts it, the beginning of a beautiful friendship, one that centered on his store full of poetry.

Today, Peter Howard’s gone. Pancreatic cancer, diagnosed about a year ago, got him two days ago, and the world of poetry is now much diminished, and I’m out a friend.

Peter Howard was the proprietor of Serendipity Books in Berkeley, a rare book concern that ran for close to 50 years, first out of his home, then on Shattuck Avenue and for the last almost thirty years out of a big building on University Avenue.

Peter Howard by any measure was the major domo – the engine that powered – the Bay Area rare book trade. Even that doesn’t indicate the measure of his reach. Sometimes, as when he’d broker or harvest the taking in of a huge collection (e.g., that of the fabled New York collector Carter Burden or that of Sir Joseph Gold, each of which had deep and rich assortments, thousands of books worth, of poetry), the entire cadre of the nation’s antiquarian dealers would come a-calling.

Peter Howard had an incredible if simple philosophy regarding poetry: no matter what, he’d take it in and put it on a shelf. His store had hundreds of shelf-feet of alphabetized-by-author poetry books. There were well-known poets, the obscure, and the completely and totally forgotten; big publishers and the smallest of the small.

Serendipity had special sections for many poets, including for example (and these hardly scratch the surface) Duncan, Spicer, Eigner, McClure, and Stein, plus many other special sections (one example: a half-shelf of nothing but the 8.5" x 11" mimeoed titles published in the 1970s by Adventures in Poetry). There was also a closet for assorted additional good poetry (supplemented by a locked safe), huge file cabinets filled with broadsides, and at least one “secret” section where even more “good poetry” would be shelved. All this plus huge amounts of modern fiction, sci fi, and other first edition literature, and the new and not-so-new arrivals, piled or bagged on the store’s floors and tables.

Although Serendipity lists approximately 20,000 volumes on the internet, Howard and his staff (including the amazing Nancy Kosenka) actually possessed probably twenty times that amount (i.e., in excess of 400,000 items). Living across the Bay in San Francisco and (at least for the first approximately fifteen years after first discovering the store) working in San Rafael, I spent a lot of hours – and a lot of money – at Serendipity, happily so. Somewhat miraculously, about three years ago the office in which I work moved to within an easy lunch-time walk of the store. Sometimes even us fools get lucky.

As indicated above, I’ve also been lucky in that I’ve been able to buy books at Serendipity, including at times on time, with Peter insisting that interest was totally out of the question, even when he carried the amount due for months. The poetry I received in return amazes me to this day, including for example (to do the alphabet thing best I can here) the first books of Helen Adam and Bruce Andrews to those of Lew Welch and Phil Whalen, and all kinds of poets (and all kinds of books) in between.

For reasons not entirely clear, and although he had a well-earned reputation as a catankerous, arrogant son-of-a-bitch, Peter and I became close. After learning early on of my particular love for the poetry of Philip Lamantia, he offered me each and every thing he had or henceforth received related to Philip, and told me (before the internet search engines changed the game) what other booksellers to contact to find publications he did not have. Serendipity is a major reason I’ve been able over the last 20 years to put together a comprehensive chronological checklist of Lamantia’s books and other appearances in print.

Plus, and maybe because he liked me a little, via Peter Howard I came to many once-in-a-lifetime books. Things like Mina Loy’s first book (Lunar Baedecker, Contact Editions, 1923). One of the thirteen special copies of Caesar’s Gate (Divers Press, 1955) with a holographic (and otherwise unpublished) poem by Robert Duncan and full-page, full-color one-of-a-kind original paste-up (collage) by Jess. Harry Crosby’s Aphrodite in Flight (Black Sun Press, 1929), an impossibly rare collection of poetic aphorisms conjoining flying and seduction. And Elsa Gidlow’s On A Grey Thread (W. Ransom, 1923), the first book of openly lesbian poetry published in this country. You get the idea.

But just in case, how about the mimeographed program, featuring on the cover a reproduction of one of Bruce Conner’s felt-tip pen mandala-like drawings, for the very first Trips Festival, held in January, 1966 at Longshoreman’s Hall in San Francisco? I found that impossible rarity one Saturday a decade or more ago, in a nondescript pile of ephemera and old magazines on some random shelf, and Peter insisted on selling it to me for three dollars (or was it one?). He’d do that once in awhile when a particular item was unearthed from a book-buy for which he’d long before turned what he considered a decent profit.

Peter Howard loved baseball, in particular the San Francisco Giants. He held season tickets for so long (from somewhere in the mid-1960s) that the ballclub itself didn’t even know how long he’d had them. He kept score the old-fashioned way, and his eternal optimism for the Giants, no matter how grim the prospects, was most instructive and helpful. I loved going to games with him. He was very smart, widely traveled and well read, and could mix it up, conversationally or argumentatively, with anybody. Nine innings at the yard with Peter was a mighty fine time.

Peter’s seats, both at Candlestick and (for the last decade) at the waterfront park, were primo: about ten rows up from the visiting club’s on-deck circle (Peter liked to see the other teams’ players since he saw the Giants’ all the time). When he couldn’t make it to a game, he’d offer up his tickets gratis to a wide circle of folks, including for example his UPS delivery guy. He would even give away tickets in advance if you asked, and he’d always throw in his “Lot A” parking pass too, for a total per game value (given the price of a pair of field level seats) of about $150. In this way, and thanks to Peter, my wife and I enjoyed a half-dozen or so Giants games every year.

Peter met his wife, Alison (who also died within the past year), when the two were doing field work for the Quakers in Alaska. The two taught me how easy it was to make pasta from scratch, and showed me the fun of entertaining with a touch of extravagance. Every couple of years, the Howards would hire an accomplished piano player to perform a concert in their North Berkeley house, and invite a small group to hear Mozart and Liszt in their small living room.

Best and most stupendous of all, every two years, coinciding with the big February antiquarian book fair in San Francisco, the Howards would throw an enormous all-day party at Serendipity. The last few times – including this past February – the main parking lot would be tented over, the side lot give over to the caterers, and oh god what a feast: breakfast, lunch, and dinner, with just about everything you might imagine, including whole roasted pigs and dried figs crusted with fresh ground pepper.

But I must return to the poetry. As I look around at the shelves tonight typing this, I remain in awe of the books that came from Serendipity. Even in the last few months, after years of unfettered access and countless sessions scouring the store’s shelves book-by-book, unbelievable treasures could be and were found. Among the items I bought there in the last few months were the first books of Joseph Ceravolo, Juliana Spahr, and Andrew Joron (the latter in the hardcover version), plus wonderful oddities such as a pre-publicaton flyer, with selections, for Tom Raworth’s Writing and a beautiful hardcover and dust-jacketed first edition Modern Czech Poetry, an anthology from 1945. All these books, save the last-named volume, are essentially impossible to find currently, including on-line, and yet there they were, at Serendipity.