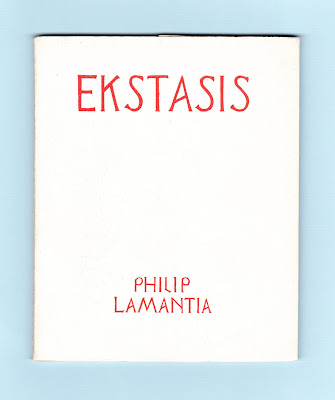 For the fourth time in the short (and admittedly somewhat irregular) history of this here glade, it’s Philip Lamantia Day – the anniversary of his birth (October 23, 1927) – an occasion to remember and celebrate the Sicilian-American / San Francisco poet who died in 2005 and whose poetry forever inspires. So all right, and . . .

On the three most recent anniversaries of Philip’s birth, I’ve respectively (1) taken a look at his first major publication in print, in 1943; (2) surveyed about a dozen poems, by an equal number of poets, written for, to, after, and/or about Lamantia; and (3) told about a few of the many things I learned from him.

This year, I celebrate by sharing a wild visual or shaped poem first published in Lamantia’s Ekstasis (San Francisco: Auerhahn Press, 1959), the cover of which (lettering by Robert LaVigne) is pictured above. Take a look, and read if you please, “In a grove” — 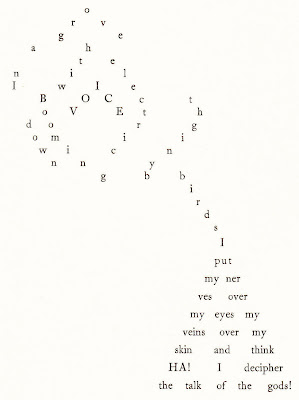 The typography of “In a grove” suggests a pryamidal censer, or perhaps a triangular candle, from which smoke wafts and curls. The poem’s text conveys an ecstatic experience, or I think more precisely the energy and kinetics of such an experience: Lamantia seizes, or is seized by, an apprehension of that which is without, via a kind of out-of-body – or at least body-altered/body altering effort. It’s not prototypically religious ecstasy here, but it is divine and otherworldly both in subject matter and – I insist – in its achievement.

I love the visual confusion of the words in the curling smoke, and the power in the center of that part of the poem, the latter charged up by the use of capital letters for VOICE and the adjectives (booming, electric) paired with that noun. It all is a mimetic equivalent of the mind/soul getting hit and thrown off balance by that which is heard.

I love too how the wafting, curling words resolve into “night birds / I” (the latter at the top of the pyramid), with that hinge foreshadowing and in fact perfectly encapsulating the entirely of the ecstatic identification detailed in the rest of the poem.

And I love as well the emphasized interjection “HA!”– Lamantia when speaking had probably a hundred inflected variants of “Ha! and “Ah!” which he would use to shorthand everything from enthusiasm to puzzlement to – as here Eureka!-magnitude emotional certitude and recognition. That certitude is also reflected in the pyramid structure at the bottom part of the poem – about as solid an architectural base as might be imagined, and one that contrasts beautifully with the lexical in-the-air-ness of the top half.

One night more than a decade ago Philip was visiting here at my house, and it happened to be one of those rare San Francisco nights in which the temperature held at circa 70 degrees. We sat at the kitchen table talking, windows open to the backyard – which itself is adjoined by the backyards of neighbors. Soon enough – keep in mind Philip could talk with the best of them – it was nearing 3:00 a.m. and in a sleepy stutter in the conversation we both heard what I believe was a mockingbird, calling from the yard out the window.

“We MUST go hear that,” said Philip. And so down the back stairs we went into the dark, to the middle of the yard, close to where the mockingbird – which we could not see – talked on. I don’t know if anyone deciphered the electric voice of that bird that night, but – HA! – I like to think that maybe someone did.

+(+)+
Lamantia bibliophiles may be interested to know that “In a grove” – since its first publication in Ekstasis – has appeared in the Ishmael Reed edited anthology, Calafia – The California Poetry (Berkeley: Y’Bird Books, 1979), then (under the title “Voice”) as a beautiful color over-sized broadside print, and one of thirty different poems from throughout history, as a part of the Glenn Todd edited Shaped Poetry (San Francisco: The Arion Press, 1981), and also in Bed of Sphinxes: New & Selected Poems 1943-1993 (San Francisco: City Lights Books, 1997). The poem no doubt will be included in The Collected Poems of Philip Lamantia, currently scheduled for 2013 from University of California Press.