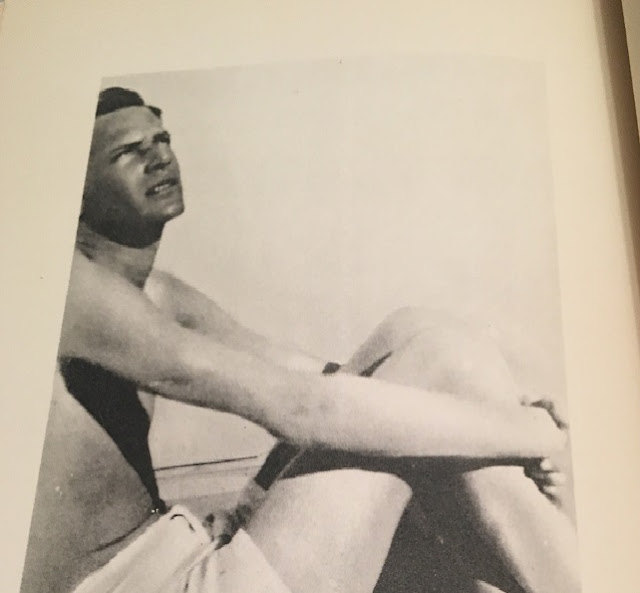 Among those who love the writing of Harry Crosby (born this day in 1898), the big news over the last 12 months was the publication of a Selected Poems.  The book, announced by MadHat Press as available in June 2020 (and paid for then), arrived in early 2021.  I’d hoped it would nicely showcase Crosby’s poetry.

Alas, while the book has some positives, its major problems are, unfortunately, the main story.

Here’s the deal: the primary criteria used to select the poems – everything that happened to be published in magazines and anthologies in or just after Crosby’s lifetime  –  is unconvincing, and in part botched.  As a result, this Selected includes nearly a dozen pages of work that ain’t poetry, and another dozen pages or so of, I kid you not, essentially duplicate texts.  Ugh.  Further, due to either uninspired or uninformed editing, a dozen or so essential Crosby poems are not included.  Ugh again, and let me explain. 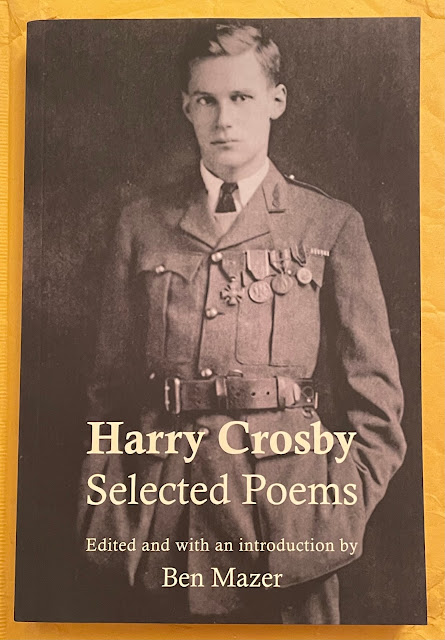 About two-thirds of the book – the  first 100 or so of its 150+ pages– is given over to what is  said, to quote the introduction and back cover, “the whole of” or “all of” Crosby’s contemporary magazine and anthology appearances.  This was done, the editor asserts, so we can read the poems seen at the time, and have a historical record of what was submitted by Crosby and printed by others.

That reasoning doesn’t make sense.  At the same time he submitted poems to magazines, Crosby self-published , or prepared for publication, several volumes of his poetry.   I would think the work he chose to collect and publish himself would be the starting point for any selected poems, as well as the poems not included in those books but which appeared elsewhere.

Said another way, the right way to compile a selected poems is to consider EVERYTHING  a poet wrote, then, focusing on the work itself, fashion a collection that  reflects the breadth or characteristics of the poet’s achievement, or some other angle intrinsic to the work.  Discarding all that for an extrinsic and rather arbitrary factor such as where poems happened to first appear, especially when the magazine and anthology poems are greatly outnumbered by the entirety of the poetry, devalues the work as a whole, and thus the poet’s legacy.  In this way, much of the MadHat selected Crosby is wrongly compiled.

The book, by the way, fails in it’s on its own terms. Contrary to its claims, it does NOT include the “whole of” or “all of” Crosby’s contemporary magazine poems.  O editor and publisher, get thee to Poetry, Vol. XXXIV, Number 11 (May 1929), at pages 78-79 (“Fragment,” a 35 line verse poem).  I wonder what else was missed?  Oh yeah, the key series of question and answers, first published in transition 14 (Fall 1928),  that Crosby published as the prose poem “Enquette” in his Mad Queen.  This tremendously entertaining four-part word-rush reveals much about Crosby’s vision of himself, including as an expatriate outsider.  “The End of Europe,” a short visionary and apocalyptic prose-poem in transition 16-17 (June 1929) is also not included.

And while these poems were missed, the editor includes a straight prose work, “Observation-Post,” which appeared in a magazine.  It’s an essay in which Crosby critiques a magazine essay dismissive of poets that Crosby considered “the True Dawn.”  That this is not a poem is obvious.  In addition to being closely reasoned, the essay quotes liberally from the work of a number of poets, including the entirety of Hart Crane’s “O Carib Isle.”  The editor does not explain why this essay is included in a book of poems.  It takes up 11 pages and is a big mistake.

Also, the misguided decision to include ALL magazine and anthology results in – I kid you not – approximately three dozen poems being repeated – one three times – because they appeared both in magazines and then later in an anthology.  Most of the repeated poems, which mostly all appear in the book’s first 90 pages, are duplicates of each other.   In the others, there are minor – very minor – differences, such as additions of a title.  Can you spell s-i-l-l-y and a-n-n-o-y-i-n-g?  This Selected is not supposed to a variorum edition. The poems  as Crosby finally published them himself should have been used, period.  The duplicates here, which collectively take up about a dozen pages, are another big mistake.

I’ll do the math: between the prose essay and the duplicates, there’s almost two dozen pages of text that’s either inappropriate or unnecessary.

All those wasted pages are a shame given the poetry that is not included.  There’s almost nothing from Crosby’s first two books, Sonnets for Caresse and Red Skeletons.  The editor implies that the work in these books is not Crosby’s “mature period.”   While that is true – the poetry’s  largely derivative in style, tone, and subject – there are a few gems in those books not included here (the homage “Baudelaire,” to name one) that would rightly shine in a selected poems.  Devour the Fire, a Crosby selected poems published in 1983, managed to do so.  It’s strange to that so few poems from these books are included, while an 11 page prose essay and at least that many pages worth of duplicate are.

Triple-alas, many stellar and essential “mature period”  Crosby poems are missing. These include the dardanic masterpieces “Stud Book,” “Sun-Testament” and “Telephone Directory,” the scintillating “Photoheliograph (Self-Portrait),” the hyper-fervent Boston-excoriating “Target For Disgust,” the marvelous Egyptian travelogue in verse “House of Ra,” “Sunrise,” a mini-epic of witnessing, the super-short but important late-life list poems “Beacons,” “Vocabulary,” and “Library,” in which Crosby sets forth, respectively, his tippy-top people, words, and books, and the brilliant manifesto-like prose poems “I Climb Alone” and “The Ten Commandments.”  All these, as I count, would have fit on the pages wasted on the long prose essay and the duplicate poems.

Okay, the editor here swung and missed lots.  As a result, and sadly, this Selected Poems is far duller than it should have been.  The book simply does not showcase the full splendor of  Crosby as“a true dandy of explosive Promethean desire,” to use Philip Lamantia’s  characterization in “Poetic Matters” (1976).

To be fair, the book does some things right.  The introduction winningly includes the Crosby diary entry about his inheriting a huge library of rare books.  This passage, a de facto prose poem, will make bibliophiles swoon.   The book proper includes “Illustrations of Madness,” a prose poem in ten short sections that since its initial 1929 magazine appearance has only appeared in an extremely limited edition of uncollected Crosby poems published about five years ago.  (That publication winningly included an additional sub-part to the poem that the magazine apparently edited out).  The poem is exactly what its title implies; certain sections memorably disturb, in the way great art sometimes does: “I continually feel hurricanes of magic storming into me as wild as eagles catapulting themselves into the sun.”

In addition, the book includes about a dozen Crosby classics, mostly because they happened to have been originally published in magazines or anthologies..  Among these are the disturbing and breath-taking “Hail: Death!,” the Joycean (cf. Episode 17 of Ulysses) “The Sun,” the marvelous manifesto-like “The New Word,” the stirring and inspiring rejection of the past, “Trumpet of Departure,” the middle-finger (and more) to businessmen, “Scorn,” the beguiling “Short Introduction To The Word” (albeit an edited version that lacks the full power of the original), the erotic quick five-line verse poem “Kiss,” and the breathtaking revolutionary spirit of “Assassin” (“I am the harbinger of a New Sun World.  I bring the seed of a New Copulation.  I proclaim the Mad Queen.”).

That said, all the poems listed in the preceding paragraph, except the five-liner, are included in Seeing With Eyes Closed: The Prose Poems of Harry Crosby (Quale Press, 2019).  That book also includes most of the essential Crosby poems mentioned in the paragraph above that begins, “Triple-alas.”  And there’s a lot more in that book as well, including all of Crosby’s Aphrodite in Flight, a series of aphoristic poetic prose meditations on the correspondences between airplane flight and love.  Even without any verse poems, this collection is far closer to a representative selection of Crosby’s poetry.

So I celebrate today the poetry of Harry Crosby, but not so much the MadHat Press Harry Crosby Selected Poems.  And I dream of a complete collected Crosby, with not only all that Crosby published, as he and his wife Caresse published it, but with some of the work currently only available in archives, not published by Crosby or others in his lifetime, and only in very limited editions since then.