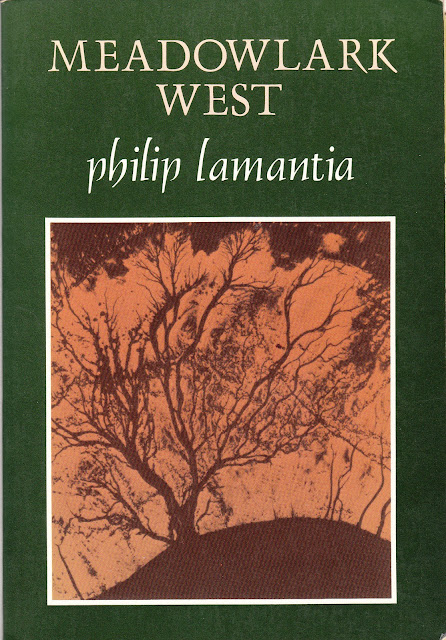 Meadowlark West, published in 1986, was the last all-new collection of poetry Philip Lamantia published in his lifetime (he died in 2005).  On this – the 85th anniversary of his birth on Sanchez Street in San Francisco in 1927 – yes, it’s Philip Lamantia Day! – I celebrate the book, which after 26 years and dozens of re-readings remains gloriously invigorating and fresh.

The poems in Meadowlark West - there are 34 in the book’s 73 pages - still jolt and inspire most fundamentally because of the hugely ambitious purpose that animates them.  The poems were written, to quote a  prose comment embedded by Lamantia in “Death Jets,” to “respond to the omnipresent threat of species suicide.”  Against that possibility, the poems, to use the simile with which Lamantia begins “Reached the Turn,” are “like opening a door to another land.”

Another land where “Poetry magic love liberty” (to quote from another poem in the book) reign and where one might find (quoting here from various poems):

Sirens at doorways on rocks in place of gutted rooms

the flocculent chance of onyx leaves

Lamantia in lines like these convincingly shows that, as he declares in one poem, “the jacknapes of surprise line my vision with orchidian trumpets.”   It’s a vision he carries out in Meadowlark West with the deepest conviction of purpose.  As he declares in “Exorcist Exercises,” it’s “my nomenclature against the orthodox.”  He seeks nothing less, to quote the line that follows in that poem, than a “morphomatic revolution by the lyrical swarm.”

And “swarm” is key.  It’s a “frenzy mantic mania” (“Invincible Birth”) lexical field of energy, with (to quote another poem) “Mercury / Quick” shifts abounding.  It’s a powerful experience, as Lamantia in that poem suggests:

With this sort of approach, line-to-line explication and logical explanation generally isn’t possible, for me at least, and it’s this (to quote Lamantia) “irrational factor” (“The mind is a black hole of beautiful chance encounters,” he also writes) that keeps the collection ever-vital.  Lamantia’s leaps-of-thought-in-words energize the mind, no matter how many times the poems are read.

The other key characteristic of the poems of Meadowlark West is their use of allusions and references.  It’s a big-time parade of allusions, and to use just a few examples from but one of the poems, they range from the familiar (Sor Juana and John Donne), to those that can be unlocked with a bit of research (“the massacres at Humboldt Bay in the nineteenth century,” “the red obsidian light of Church's Cotopoxi,” and “Gilak in the Pomo legend,” for example), to a few which seem destined to remain mysteries (try “the collini lombardini,” and “the Canadian octophagic”).  References to California and west coast lands, American Indian culture, and bird life are most common, but lots of other things come in – and this pulling in of much else also keeps the poems fresh.

I’d also like to point out – if only to underscore my love of this book, that this blog takes its name from a line in Meadowlark West.  Here’s the final stanza from “America in the Age of Gold”: