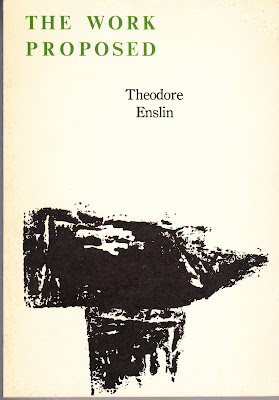 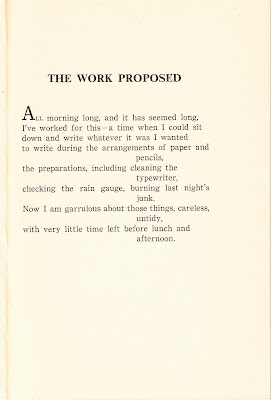 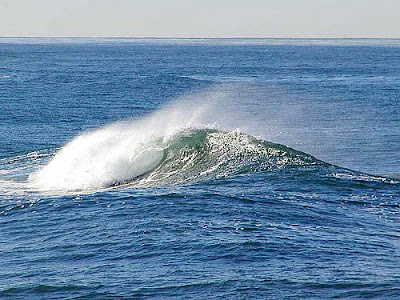 Of wave wavelength in freshened breeze
along the longest length of breadth the waves
long comb of waves     or chop of rising seas
the waves     the longest     climbing over length     to
tumble down     a freshening     remaking of the breeze
is wavelength freshening     as a breeze is length
in breadth the combers     waves that tumble
down     around the chop of rising seas     so fresh
the breeze     the rising wave in length to rise
to tumble combers     breadth as length remaking
wavelength freshened in the breeze     a length of wave
long and chop on seas     the rising     let them tumble
down in climbing     combers of the sea     its wavelength
chop in rising as the waves are rising from the sea
in wave wavelength to freshen in the breeze
all length and breadth will rise to tumble down
along the longest length of them and breadth
wavelength freshening along the breeze to tumble
down     as down remembers longest length of wave.

Posted by Steven Fama at 6:57 PM No comments: 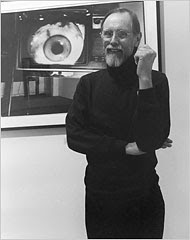 Bruce Conner, the great San Francisco artist who died in July, 2008 (pictured above, in front of one of his photos, and yep, that's a giant eyeball -- here's looking at you! -- on the TV!), would have been 78 today. Well, I and many others I am sure miss him a lot, but we still have his work to stare at, and to stir our spirit, and this past year has been mighty interesting in that regard. Here's a selection of what was up with Conner and his work in the last year: 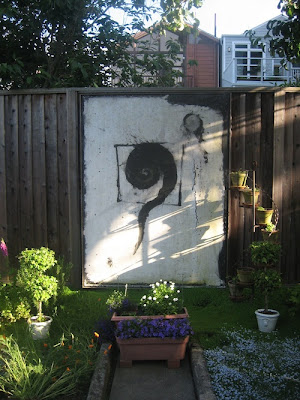 In late June, poet, essayist, and editor Garrett Caples published at the Poetry Foundation's Harriet site a particularly well written and well-illustrated essay on a particularly unusual Conner work -- a painting hung outdoors with full knowledge that it would be exposed to the weather and thus would continue to change. The article's linked to here, and you may find it an interesting read.

Presented during the tenth anniversary of 9/11, this exhibition included a series of works which Conner began after hearing on the radio of the planes flying into the World Trade Center, and continued in the weeks thereafter. Conner made inkblot drawings (using a splatter blot method), cut them into the shapes of leaves, and then collaged the leaves onto silk scrolls (but never put his name on the works, instead insisting they were done by Anonymous). The exhibition was rounded out by Conner's collage film HIS EYE IS ON THE SPARROW, completed in 2006. Holland Cotter, reviewing the show for The New York Times, wrote that the works brought together Conner's political awareness and impulse towards the visionary. Of the film, Cotter remarked, "When it comes to meditating on unthinkable tragedy, no art can ever say it all, but this little film, so sweet with hope, says a lot." 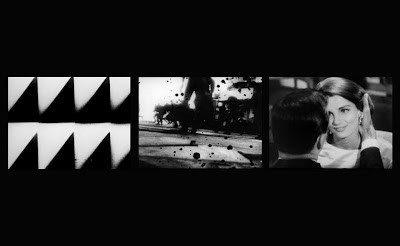 EVE-RAY-FOREVER is a three screen, silent, projected black-and-white film, first completed by Conner in 1965 and then brought through the digital keyhole by him in 2006. An interesting thing about this one is that all three films are designed to play in loops, but each has a different running time, so that the three images seen are never the same! It's quite invigorating. After seeing the film at Brandeis earlier this month, Sebastian Smee, the 2011 Pulitzer-prize winner for criticism, wrote this in The Boston Globe:

EVE-RAY-FOREVER has an astonishingly crisp beauty. In just a few minutes, it does to your head what a long, late-night ramble through city streets does to the state of your soul: makes it tremble and blur, even as its racing, leapfrogging perceptions come to seem more fragile and friable by the minute.

+(+)+
Bruce Conner in the '70s
Kunsthalle Zürich at Museum Bärengasse, Switzerland
April 2 - May 29, 2011
This show of paintings, prints, film, and other work (which had originated in 2010 at the Kunsthalle Wien in Vienna) had a visually arresting poster, using an image from Conner's 1967 dance and spirit film BREAKAWAY: 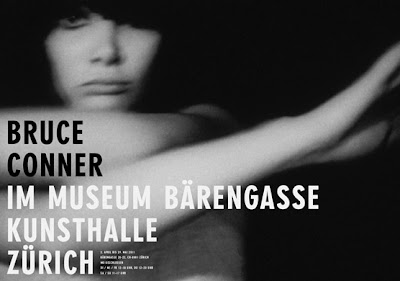 This museum exhibition also inspired Sandra Bauknecht, a fashion writer with what seems to me to be a very smart eye and mind, to write about it, in a post she titled "Art, Handbags, and Obsession" (click here to read it). Here are two photos Ms. Bauknecht used to illustrate her piece -- yes, Conner paintings serve as backdrops in both -- and I do insist that it's a total fashion/art triumph (in the second photo below, Ms. Bauknecht is on the left): 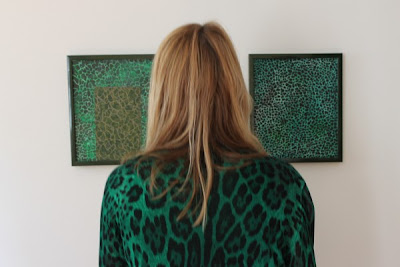 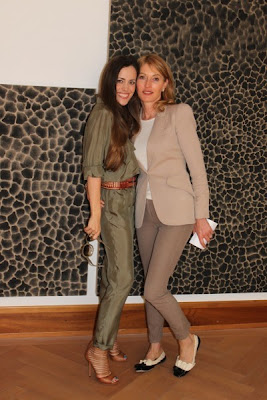 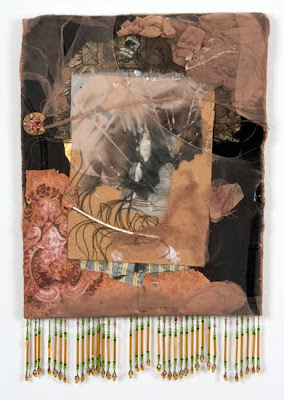 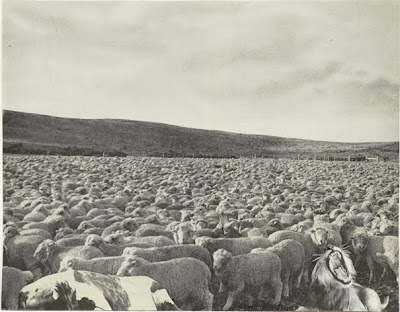 HELLO?, 1959
Jean Conner
Collage
7 1/4 x 9 3/8 inches
This exhibition displays close to 50 works by Bruce Conner, and a similar number by his wife Jean, all of which was made in the late 1950s and early 1960s. Because it just opened, no reviews have been published, but as the year draws to a close it has to be one of the finer gallery shows in Los Angeles. More important, it will rightly cause people to think about how Bruce and Jean -- who were married to each other for more than 50 years -- influenced each other's work. 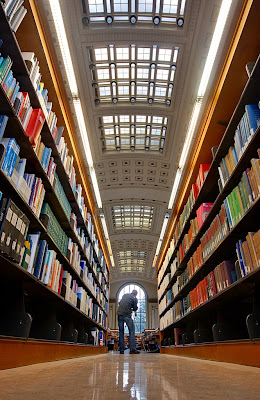 In the years before his death, Conner donated most of his paper records and other archived material -- including a fabulous year-by-year scrapbook covering approximately the first two or three decades of his artistic work -- to the Bancroft Library at UC Berkeley. The material amounts to 30 linear feet, and the finding aid -- which I believe became available on-line just this year -- runs 31 pages. The aid includes a a concise biographical introduction (click here to read), and the entire aid was obviously carefully and I say lovingly compiled by Dean Smith, a long-time Bancroft staffer who also happened to know, and make art with Conner. The Finding Aid and papers it catalogs will most certainly be a necessity and a joy for those wanting to know more about Conner. 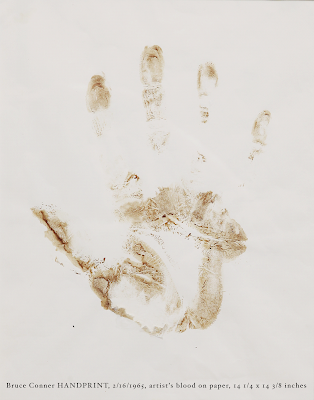