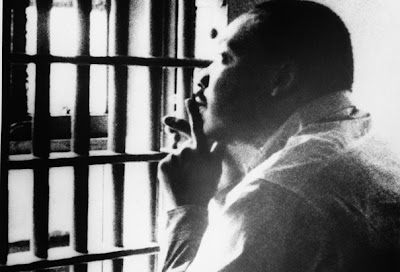 Posted by Steven Fama at 3:00 PM No comments: 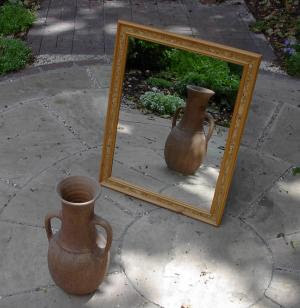 . . . the very age and body of the time [its] form and pressure.
– Hamlet, III.ii.20-23
I’ve recently here in the glade trumpeted (loudly, at that) seven books published last year that ROCKED my poetry reading world (click here). However, I’d like to herald two others that appeared in 2011 that definitely deserve a shout-out and, if you please, maybe even a reading by you.

In addition to being individually great, these two books – wordlick by Joe Ross and war by andrew topel – also can be rightly paired with each other. Both use words in highly unusual ways to show something of the world, and neither adds any poet-centric (or other) exegesis or critique. In other w-o-r-d-s, the language in these poems – particularly the way it is used and presented – is the thing itself. These works – book-length poems in both cases – can be called lexical objects, sculpted or constructed of language.

Maybe that’s vague or confusing? Well, let me, if you please, show and tell a bit about each. 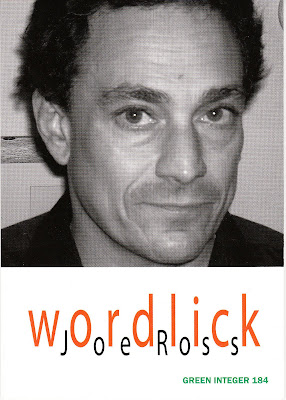 Joe Ross
wordlick
(København & Los Angeles: Green Integer Press, 2011)
[6"x 4.25", 62 pages]
Since buying Joe Ross’s wordlick (yes, it’s all lowercase on the title page) six months ago – and let me here thank Mark Wallace, who in June wrote a bit about the book on his blog, sparking me to get it – I’ve constantly made like a, well, like an animal to a salt block on a hot day, repeatedly returning because I find in it something both essential and quite pleasing. 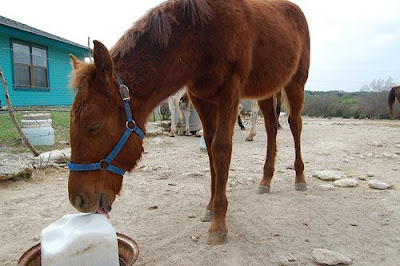 Portrait of a Blogger Returning to Essential and Delicious Poetry
Immediately below, for your enjoyment, is poetry from a single a page from wordlick. This excerpt, taken from near but not too near the book’s end, is representative: essentially, every page features – similar to what you’ll see here – three stanzas, each of which has five medium-length lines, with each line having many word combinations, or rather more accurately – and watch me here – wordcombinations. Here’s how it looks, and reads:

And so wordlick goes for about 50 pages. It’s irresistible to me, hearkening back to Baroness Elsa (she a wordcombo devotee, click here and scroll down), the neologistic nirvana of Finnegans Wake, and a few other poembooks (Naturalistless by Christopher Rizzo – click here – being a notable example from a few years ago) in which newwords predominate. At reading a few months ago in Paris (where he lives), Ross read a bit from wordlick (click here to see and hear) and explained:

This book, as the title wordlick suggests, is made of word combinations . . . . What I was trying to do was look at the sounding of the language, and the mess that we’re in, and just try to – not say anything about it – but actually just show it.

“[T]he sounding of language” part is easy enough to understand, I think, but perhaps less so “the mess we’re in” given that “mess” can spread in a whole lot of directions. But experiencing the relentless jammedwording of the poem, the difficulty of parsing many individual wordcombinations and, even when that’s done, sustaining acute attention for more than several pages, I have an idea.

“The mess” that Ross is out to “actually just show” in large part concerns what I’ll call the infooverload in and bombedsensesblitz quality of contemporary life. I’ll put it like this: if you were to take in wordlick in a single sitting, you’d end up in a datastimulated floodfunk that probably would require, as an antidote, a long, slow off-trail walk off-trail someplace on a perfectly windless day so that the silence, and maybe the crunch of your boots in the dirt, are the only sounds you hear.

In addition to its accurate mirroring of the insistentseethe of modern life, I really like the inventiveness in wordlick. Admittedly, some of Ross’s word combos such as (referencing the three stanzas quoted above) “eyerubbed” or“dimlighted,” have an easy naturalness to them, and I suppose even something like “sementoast” might be familiar in some crowds (okay, probably not). But many combos – such as “spidersmiled,” “rooffickle,” “againstand,” and “getawayhearse” – are fresh, lovely to decipher and take me to reverierivers that have surpassingly strong currents.

Further, some of the combos in wordlick – “againstand” in the second stanza above is an example – can swing two ways (“again | stand” as well as “against | and”). And even when wordcombos can really only be read a single way, the decoding, as I’m sure you discovered, can be difficult, especially when mid-wordcombo double consonants have the look of a “real” word but in fact represent the end of one and the start of another (e.g., “rooffickle” in the second stanza above) or the combo’s pivot point has a letter that could belong to either the first or second word (e.g., the second “s” in “spidersmiled,” which might be seen as forming a plural for the initital noun (i.e., “spiders”) instead of start of the concluding past-tense verb (i.e., “smiled”)).

The challenges and confusions of the wordcombos, of course, fit perfectly with the idea of Ross using the language here to reveal the thing itself. The it’s-hard-to-make-sense-of-things-when-it-all-comes-at-you-mostly-jammed-together-and-without-much-pause-in-the-flow is I think a part of “the mess” that Ross in his poem “actually just show[s].” I see, and feel what he shows, and, find wordlick, as indicated above, extremely compelling. Extremelycompelling.

+(+)+
War, goddamn war, is surely a part of the “form and pressure” of “the very age and body of the time” in which we live. War sometimes seems, it probably is, a 24/7/365 phenomenon: stealth bombers, predator drones,“kinetic shaping operations” (a particularly insane bit of military psycho-parlance there), and all the rest (add here: pissing on fresh-killed bloody corpses) that’s a part of the organized killing, maiming and destroying that we – and I use that pronoun for humans collectively – seem to love.

Speaking of love, maybe you remember, or have heard, that Troggs’ tune from the 1960s, “Love Is All Around.” Well, okay, I get that song’s point (though not so much its sappiness), but a persuasive case could be made that it really ought to be “WAR Is All Around.” That war is the universal force, the all-mighty source of all, is a very uncomfortable notion, to say the least. Know what I mean? 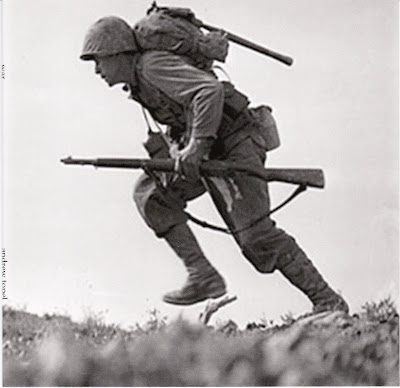 war
andrew topel
(Clearwater, FL: avantacular press, 2011)
[7.5" x 7.5", unpaginated [but 36 pages]]
Well, I think andrew topel (he prefers, by the evidence in this book and elsewhere, his name in the lowercase and thus I so type it here) knows what I mean. Although he often works in viz-po (click here), topel sometimes goes textual, and he has here written a book that seems to be an attempt to show with language, to be-in-words, something of the rat-a-tat bombs-away absurd dehumanizing overwhelmingness of war. Here’s how topel, who in this instance is both poet and publisher, describes war (yes, it’s lower case on the title page) on-line:

. . . written by a renegade with text grenades - a sonic assault, salt & peppered with phonic land-mines to bend the spine as well as the mind - read at your own risk with a medical kit on hand

This description, even allowing for topel’s sly humor and use of puffery of the kind I sort of enjoy in all commercial come-ons, does accurately suggest what is found in war. But let me be specific: the book – the poem – is slim, at 30 unpaginated pages, and yet packed, since every page consists of margin-to-margin (left-to-right and top-to-bottom) unpunctuated text, 33 lines per page, with 10 to 17 words per line, that just comes at you and comes at you and comes at you. It’d be VERY difficult to replicate the look of even a single line on ol’ blogger, so here’s a scan of a single page (click the page-image for a clearer view) for you to read: 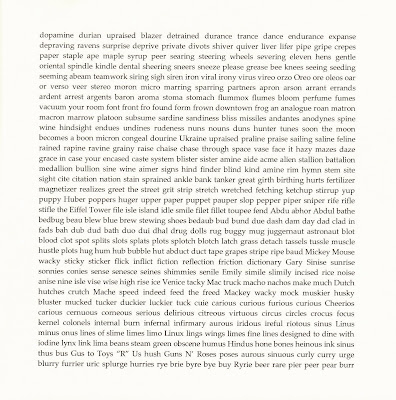 In case you weren’t able to view the image, the first nine lines of the page, save for the justified margins, go like this:

That war goes in this manner, margin-to-margin on decent-sized sheets for 30 pages, is mighty impressive. Some very sustained attention by topel must have been brought to bear on this work, presumably over a considerable period of time. The result, I think it fair to say, overwhelms the reader. How did you make out reading the above page? And that, the overwhelmingness of the experience, is part of the point; the words are used to do just that.

Also part of the point is that it never adds up to anything except in the word-to-word connections mentioned above. In this way, I think the book is as described: an assault, and specifically an assault on comprehension as traditionally sought or found in a text.

More bluntly, attempts to make connections, or sense, in war are relentlessly blow to smithereens. Reading the book – and this is especially so when re-reading it, since in the first time I made like a low-grade grunt and slogged through it line-by-line – I get so I am almost compelled to eye-jump around and within the text, taking a word from here, then there as I zig down or zag up the page, or even cross the gutter to take a bit or a bunch from the facing page. This fragmenting of the visual experience seems unavoidable given the poem’s language’s explosive attack on meaning. So I think the poem is, to quote its first and last word, “war.”

Now, I am certain that topel isn’t championing war – everything I’ve ever read by or of him suggests a deep pacifism. The poem, I think, simply presents the relentless impossible absurd violence via the very way its words are presented. It’s meant, I believe, to disrupt, get into the eyes, mind, and emotions of readers. And that war does.