Lamantia was born (on Sanchez Street) and raised (the Excelsior District) in San Francisco, and for most of his life called The City home. Perhaps not surprisingly, his poetry – see please The Collected Poems of Philip Lamantia (University of California Press, 2013, with a paperback edition published – hey now – just this month!) – occasionally alludes to places in or features of The City. His poems also contain many references to The City’s name. Almost all these allusions and references are found in poems written after approximately 1970, when after various world travels Lamantia returned to and settled back in San Francisco (the North Beach neighborhood).

There are also references in Lamantia’s poems to more general features of The City. These include “slanting parks” (“Flaming Teeth”) and “seven hills” (the number traditionally said to exist in San Francisco). There are also – and these are obviously more pointed and critical allusions – “solemn melancholic towers” (“Tonight Burned with Solar Slime”) and “buildings of monolithic glass” (“Once in a Lifetime Starry Scape”). Another example are allusions to fog, both direct, as with “[t]he patch of summer fogs [that] screws the ears of the forest city” (“Other States”), “[r]ed fog in the night” (“In Yerba Buena”). and “enveloped by grey moist density” (“Recall”), and metaphorically, such as “On a hill . . . / the gothic spread of the mantle” (“Irrational”).

In addition to the allusions to certain places in and general features of San Francisco, Lamantia name-checks his hometown in about two dozen poems. The name-checks are particularly interesting to me – and I hope to you – because of a shift in nomenclature that Lamantia made in the work written after approximately 1980. Before then, in nine poems published between 1959 and 1970, Lamantia exclusively referred to his hometown as “San Francisco” (see list below).

But that formal appellation disappeared – was never used again – starting with the poems in his collection Meadowlark West (1986), most likely written over the course the previous five years. In five poems in that book, and then again in five poems written and published thereafter, Lamantia when referring to his hometown chose to use not “San Francisco” but the contraction or nickname “Frisco.” And he not only chose to use that term, but used in often: it appears seventeen times in those ten poems (again, see list below).

As you probably know, many consider “Frisco” very wrong, gauche, a rube’s giveaway, a term to be assiduously avoided. This view has been espoused for decades, and in the last approximately half-century was primarily and quite solidly reinforced by the long-time San Francisco newspaper columnist Herb Caen (1916–1997), who in 1953 published a popular book about The City titled Don’t Call It Frisco. 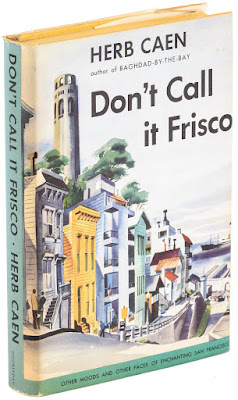 Caen’s title served as a commandment, and most obeyed, although there were exceptions including perhaps most popularly the lyric, “Left my home in Georgia / Headed to the the Frisco Bay” as sung by Otis Redding in his 1967 smash (Sittin' On) The Dock of the Bay.

Lamantia rejected the cultural taboo on Frisco, using it repeatedly in his later poetry. Best I can tell, he first used the word in print in a short prose work, “Alice Farley: Dancing at Land’s End,” included in the anthology Free Spirits (City Lights, 1982) and republished in Preserving Fire: Selected Prose (Wave Books, 2018). Why this shift in names occurred is, I think, interesting to consider.

Around 1999, when Lamantia and I became friends and he was relatively socially active, the term “Frisco” came up in a conversation. He told me he liked it partly because of his contrarian nature, given that it was a term despised by many. But more important, he strongly disagreed that the term was inappropriate, recalling its use by old-time dock-workers and others when he grew up (1930s and early 1940s) , as well as by those in the jazz and drug cultures in the late 1940s and 1950s, and people he met on his travels in the 1950s and 1960s. He thus used the term proudly, including declaring “my native Frisco” in the late poem “No Closure.”

In addition, the word “Frisco” appears to have been embraced in the late 1970s by a subset of the ecologic counter-culture that interested Lamantia. Specifically, Reinhabiting a Separate County: A Bioregional Anthology of Northern California (Planet Drum Foundation, 1978) includes an essay on the Bay Area by the otherwise anonymous “Frisco Bay Mussel Group.” As explained below, Lamantia’s was highly attuned to Planet Drum precepts, particular regarding bioregions.

Lamantia also appears to have known of the findings regarding “Frisco” published by Peter Tamony, a self-taught collector and investigator of colloquialisms and slang. In 1967, Tamony published a short article, “Sailors Called It ‘Frisco’” in the journal Western Folklore. He conjectured, convincingly, that Frisco derives from “Frith-soken,” which meant “refuge” or “sanctuary.” In the words of journalist Lynn Ludlow, from whose writings I learned of Tamony, “[b]ecause San Francisco Bay is just such a haven, sailors called it Frisco Bay.” I don’t know if Lamantia actually read or knew about Tamony’s research, but it would seem so, given the line “a true Frisco, ‘haven in a storm at sea’” in his poem “Once in a Lifetime Starry Scape.”

In addition, I believe Lamantia enjoyed the consonantal and vowel crispness of Frisco. Admittedly, this an educated guess, but after all, as a poet Philip was intimate with the wonders of language, and there’s no doubt of the fricative, sibiliant, plosive power of the word’s consonants, to say nothing of the big round “o” with which it ends. Atop all this, of course, the word’s relative concise.

Finally, it seems to me – and this seems important – that “Frisco” fits best with a kind of alternative, re-imagined or prophesied locality and region that Lamantia alluded to in the poems in and after Meadowlark West. This alternative place included what he called “Calafia” (and related terms such as “Calafian landscapes”), an allusion to the fictional (from a16th century Spanish novel) Amazonian Queen from whose name probably comes “California.” Lamantia may have first heard, or been reminded of, Califia when it was used as the title of a very diverse Ishamel Reed edited poetry anthology, published in 1979 and which included two of Lamantia’s poem.

In Lamantia’s poetic world, Calafia seems to be a place encompassing all the greater bioregion of northern California and southern Oregon. This notion presumably stems in large part from Lamantia’s study of and belief in bioregionalism as developed in the 1970s and championed thereafter by Peter Berg and Judy Goldhaft of the Planet Drum Foundation. Lamantia’s friendship with those two visionaries and their principles is mentioned in “High Poet,” the detailed and beautifully written introduction to his Collected Poems (see page liii therein). More directly, Lamantia’s brief Contributor’s Note in the journal Caliban, No. 7 (1989) discusses the ideas of Berg and Goldhaft, characterizing the two as among the “central minds” of the Planet Drum Foundation. This poetic and re-imagined place certainly includes his hometown: in the late poem “Egypt II,” Lamantia specifically names “Frisco, Calafia.” That particular appellation makes clear that Lamantia has rejected, and wishes or foresees that others too will reject the dominant, ingrained political and cultural labels, paradigms, and structures.

Other elements of Lamantia’s alternative world include “Ohlone” and related uses such as “Ohlonian spring” and “these Ohlone shores” (the latter phrase appearing in “Redwood Highway,” the long opening poem in Becoming Visible (1981)). This, I believe, refers to the Bay Area or some part of it; as Lamantia put it in the Caliban Contributor’s Note cited above, “my specific re-name for the micro-bioregion I am re-inhabiting, OHLONIA.”

Lamantia also references “Shasta,” by which, to quote the poem with that title, he appears to reference an area “from Suisun Bay north to the Rogue River,” and which he implies is adjacent to “Frisco,” which, in turn, is a “diplomatic zone between [Shasta] and southern empires of regrettable memory.” This too presumably derives from the Planet Drum worldview, as that organization (and Peter Berg in particular) used the appellation “Shasta Bioregion”often, including in the mailing address for its San Francisco post office box.

More specific to Lamantia, I believe, is his re-imagining of Telegraph Hill, on whose slope he lived during the last decades of his life, as“Bear Hill” and “Avian Hill” (see “Once in a Lifetime Starry Scape”). The names imply a hoped-for return of animals and birds of the kind found there before arrival of European: a prophesied Frisco, one as different as the names Lamantia uses to describe The City and its place in our world.

Addendum: After reading the above post, Nancy Peters, Lamantia’s widow and editor of his Bed of Sphinxes (1997) collection, provided the following comment regarding Lamantia’s use of “Frisco”:


Philip didn’t believe that . . . Frisco was actually derived from the old Icelandic.  But he was familiar with Tamony’s findings, and he loved the coincidence.  That the word and the sound would have been used so long ago and that it referred to a refuge, sanctuary, safe harbor.  His own Frisco!

I thank Nancy Peters for the clarification and additional information.  Her her last sentence, I think,  should be emphasized: by using the nickname, Lamantia created “[h]is own Frisco!” For me, that’s a singular and beautiful poetic act!

A panorama of Frisco, Ohlonia, in the Shasta Bioregion, with Bear Hill aka Avian Hill in the foreground