Poetry From the Law (part two) 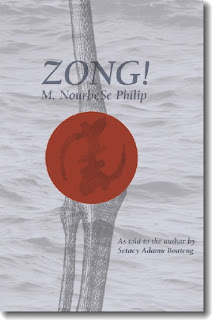 M. NourbeSe Philip’s Zong! is filled with poems made of words taken from a court decision, just as are the poems in Charles Reznikoff’s Testimony.

But despite the shared method, NourbeSe Philip’s and Reznikoff’s poems couldn’t be more different. Here’s a case – a joyful one – of wonderful poetic variation even when the “idea” behind the writing (the mining of court decisions) is the same. May it please the Court, and thank the muses, not all poet-lawyers (NourbeSe Philip, as was Reznikoff, is one) write alike.

In Testimony, Reznikoff used about 450 court decisions to write that same number of poems (one poem per decision). In contrast, NourbeSe Philip in Zong! uses a single court decision to create about three dozen poems: 32 short ones (each one or two pages in length) four long (each between 15 and 50 pages), and a single visual poem that’s several pages long.

The poems in Testimony and Zong! also differ, and profoundly so, in how facts are used. Reznikoff took facts from court decisions and made concise and clear narratives about what actually happened. In contrast, the poems in Zong!, because the court decision used as the source text only touches upon the central events which gave rise to it, concern a “story,” to quote NourbeSe Philip’s words from the book’s long endnote, that “cannot be told.”

More specifically, the source text used in Zong! is Gregson v. Gilbert, decided in 1783 by one of England’s highest courts. The decision concerned an insurance dispute. The owner of the Zong – an ocean-going ship – bought insurance to protect his cargo in case it was lost. At sea, all the cargo – according to the ship’s owner – was lost due to perilous conditions resulting from a longer than anticipated voyage. The shipowner filed an insurance claim for the lost cargo. The insurance company, however, refused to pay. The shipowner then filed a lawsuit. In the Gregson v. Gilbert decision, the court ruled in favor of the company.

The twist here – the staggering, sickening twist – is that the lost “cargo” was human beings, and the way in which that “cargo” was lost was decidedly murderous. The human beings were 250 African slaves who died for “want of water” (to quote the court decision) or because they were (said to) have jumped or (by explicit admission) thrown overboard.

The court decision (which Zong! includes in its entirety as an appendix) doesn’t make much of these shocking facts, mostly because in the late 18th century it wasn’t that shocking. As the insurance company argued, “[m]any instances have occurred of slaves dying for want of provisions . . . .” Thus, the court decision does not discuss the lives of the 250 dead slaves, the particulars of their deaths, or the specific actions or collective guilt of the ship captain and crew who killed them by not providing water or throwing them overboard. This is the story that, to use NourbeSe Philip’s construct, cannot be told (because there is nothing in the court decision about it), but must be told.

Zong!, then, is an extended exploration of just how inadequate the court decision’s language is to what NourbeSe Philip rightly believes is the essence of the story the decision actually, though sub silentio, embodies. The book is also an exergonic excavation, and an expansive expose, experimental exposition, extractive expropriation, extraordinary expatiation, and exemplary expedition as well.

The first part of Zong! contains 32 one or two page poems, each of which consists of words taken from the court decision. Typically, words are spread all about the page, usually in an arranged fashion but forsaking the tyranny of the left margin or stanzas. Here’s an example (please click image to enlarge in a new window): 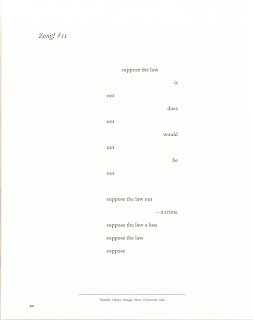 This poem uses common poetic devices – repetition, line breaks, word arrangements – to marvelous effect. The repeating of the phrase “suppose the law” and the word “not” neatly frames both the ideal and the reality in this particular court’s failure – and perhaps the failure of much of law in general – to address central truths. I also love how the blank zone in the center of this poem creates a space for the words in the two columns to resonate-volley between each other. That space also gives room for thoughts and ideas to grow and bounce about in the mind of the reader.

After these shorter poems, Zong! becomes something altogether different. Having exhausted her poetic possibilities using the words of the court decision, NourbeSe Philip decided to use that source material as a lexical storehouse, breaking up the court’s words to form – anagram style – multitudes of other words. It is these new words which are used in the book’s longer poems.

In forming these new words, NourbeSe Philip’s imagination knows few bounds. Lists included as appendices show words from more than a dozen languages, as well as long lists of animals, crew members, food, and the like, all of which she poetically imagines being on or used on the slave ship.

But even with these made-words, the story still cannot be told. The longer poems contain no clear narrative. In fact, in the final couple of long-poems, the new-words often break apart themselves, with letters and phonemes separated by blank space, a line break, or both. Here, as an example, is one of the approximately 45 pages of the section titled “Ferrum” (again, please click on image to enlarge into a new window): 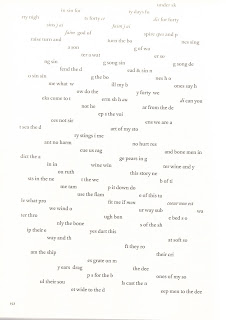 The breaking up of words, of course, emphasizes their thinginess, and gives the reader plenty of opportunities to fill in the blanks, to make her or his own words and meanings. On my poetic-dime, it’s tough to imagine a better combination than foregrounded lexical surfaces with indeterminate sense.

All the constructed and broken up words also reflect the extent to which NourbeSe Philip explored the potential of her source material. The book’s end-note, a combination diary, philosophic meditation, and explication of the work, indicates that she worked for years on the Zong! project. I deeply respect such sustained attention, both in lawyers and poets.

End note: Penn Sound includes a file (click this sentence to go to it) of NourbeSe Philip reading a number of poems from Zong!. 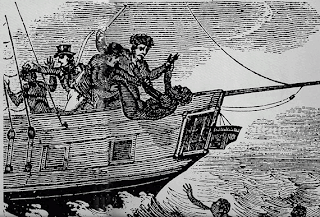 Thanks for this, Steven. I didn't know about the readings on Penn Sound.

You are most welcome, Lemon H., and I'm happy to have been a bit of help. Happy also, of course, to have been able to share something about Zong!.