Dear good folks who are the deciders on this thing: Please give the dang Pulitzer Prize for Poetry this year to a book of (mainly) prose poetry. Once in almost 90 years just doesn’t cut it. And how about at the same time giving the prize to a book of wild, experimental prose poetry? Puhleeze, do it now!

The Pulitzer Prize for Poetry – always a newsworthy (if but a paragraph or two) event – is by history a deeply flawed award, deserving of great applause maybe once every ten years or so. Most of the time the achievement recognized ain’t so memorable, and the poetry that receives the prize has mostly ranged from “S” (for school, as in academic) back to “Q” (for quiet), with the “R” in between, regrettably, standing for “routine.” Wild, Out There, or Experimental (or even experimental) are not the sort of terms generally or even ever applied to the prize-winning book.

Maybe the most incredible of the incredible Pulitzer oversights over the decades – and never more apparent than now – concerns prose poetry. In the almost 90 years in which a poetry Pulitzer has been awarded, a book of prose poetry has been awarded the prize exactly once (in 1989, for Charles Simic’s The World Doesn’t End). This award was controversial. As Simic said ten years ago, almost ten years after it happened, some in the literary establishment never got over it, in that they consider prose poetry a kind of fraud.

Well, if prose poetry’s a fraud, then I should be locked up for my own protection, because I’ve been conned by it repeatedly and deeply for years now. There’s that imposter Arthur Rimbaud and his bamboozling Illuminations, the trickster Gertrude Stein and the chicanery of her Tender Buttons, to mention but two of many tricksters who have scammed me. I’ve been cheated particularly often in recent years, in that it seems that almost every third book of poetry I really enjoy falls into the prose poetry category.

This year would be one hell of a moment to give the nod, the Pulitzer Prize, to a book of prose poetry, a wild, out there, and experimental book at that.

There were two books published in 2008 – both of which made my list of 20 great poetry books published last year – in which prose poems dominate and which could justly claim the Pulitzer. One of these books, in fact, seems an obviously appropriate winner of the prize. Now, I’m assuming that one or both of these books were actually entered in the competition (it requires sending four copies of the book and fifty bucks to a Columbia University address by a certain date). And of course I’m further assuming, against all the evidence, that those who decide on the award are ready to give the $10,000 cash prize and attendant recognition to a book of poems that are not only in prose, but way outside the mainstream.

The first book that rightly could claim the prize is Backscatter, by John Olson (Boston: Black Widow Press). I’ve written about this book (click here to go, if you please) and continue to greatly enjoy it. It’s a new and selected poems full of prose poems (with some traditional verse) that blow my mind. Here’s the book’s cover, and then a few sentences from“This Other World: An Essay On Artistic Autonomy,” a mix of poetics and prose-poetry that kicks off Backscatter and leaves no doubt as to the values of Olson the poet: 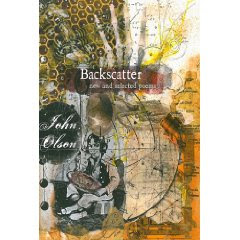 “The exhilaration of poetry is in its gall, its brassy irrelevance and gunpowder vowels, its pulleys and popcorn and delirious birds. It is transcendent yet wild, a whirl of energy in a shell of sound. A leopard of thought moving with stealth through a jungle of words.”

Now, I mean no disrespect to Olson, whose poetry I adore, but the other book published last year that could rightly claim the poetry Pulitzer really ought to get it. Ron Silliman’s the Alphabet (Tuscaloosa: University of Alabama Press) is the result of almost thirty years of work, and as such represents an achievement that very few poets ever even approach. Plus, at about one thousand pages, the book has to be the largest collection of poetry published last year. These facts, along with of course the book’s spectacular poetry, are precisely what should compel the award of the Pulitizer: a towering, distinguished book of original poems.

I’ve written about the Alphabet twice, once regarding its puns (click here) and once about a few of my favorite things in the book (click here). If a book ever should cause those who decide the poetry Pulitizer to really go in a different direction, the Alphabet is it.

Here’s the book’s cover, and then a single if long sentence from the start of section XXXVII of YOU (the next to last poem in the Alphabet) that in its careful exacting presentation of particular after particular shows well the hypnotic power of Silliman’s poetry and the skill with which he writes (and which will be a special joy to those who, as I do, love to watch baseball): 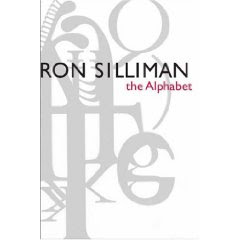 “As the pop foul descends from the heavens into the crowd, hands and gloves shoot skyward, bodies thrusting themselves up, straining, grasping, parody of a scene on Iwo Jima, while below others cringe & cower, popcorn, beers, sodas spilling in all directions, the sculptural effect complete (at least half of the participants appear to have their eyes shut), a phenomenon that repeats in smaller and less hysterical numbers again and again as the loose ball bounces untouched from section to section until a boy with an oversized blue glove smothers it against his chest.”

Well, the Pulitzer folks sure didn’t listen to me. The award was given to W.S. Merwin, The Shadow of Sirius (Copper Canyon Press), a collection of (surprise, surprise) lineated verse.

Maybe next time for John Olson and Ron Silliman. I’m pretty sure they’ll do fine without it, just as did (among others) Ginsberg, Creeley, Charles Olson, Duncan, Rexroth, Stein, and Zukofsky. Remarkable, isn’t it?

The lack of Pulitzer recognition for prose poetry remains profound. Backscatter and the Alphabet now join a growing list of snubbed collections of such poems, each of which for me continues as a source of mystery, wonder and head-shaking greatness, including: John Ashbery, Three Poems (1972), Lyn Hejinian, My Life, (1980), Lyn Hejinian, My Life (revised and updated) (1987), Jackson Mac Low, Pieces o’ Six: Thirty-Three Poems in Prose (1991), Bruce Andrews, I Don't Have Any Paper So Shut Up (Or, Social Romanticism) (1992), Russell Edson, The Tunnel: Selected Poems (1994), Harryette Mullen, Sleeping with the Dictionary (2002), and Julianne Spahr, This Connection of Everyone with Lungs (2005).

A question: if John Olson wins the Pulitzer, and I fervently hope he does, will he be obliged to spend the prize money in a Surrealist fashion?