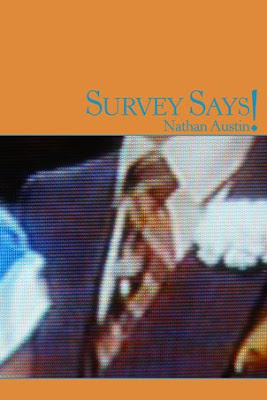 And prose poetry at that!

The title of Nathan Austin’s new book – Survey Says! – probably suffices to tip off readers as to what’s inside. It’s the catch-phrase from a long-running TV game show that pits two families against each other in a contest to name the most popular responses to a survey-type question posed to 100 people. The questions are rather simple (for example, What could you find in a tree?) and the answers equally so.

Austin provides a two sentence prefatory explanation that confirms what you’ve probably already guessed, and which helpfully tells a bit about his method:

A systematic re-ordering of all answers
(both correct and incorrect) provided
by the contestants on Family Feud over
five weeks in spring, 2005. Expanded
with answers from fifteen additional
episodes in late spring, 2008.

The key phrase there, I think, is “systematic re-ordering.” Most anyone could watch the Feud and while listening type the answers heard. I’d credit anyone who did that, and the resulting poem could well be interesting.

But better still – since it involves the mind, eye, and hand of the poet – is to re-order the appropriated verbiage. Re-order, and voilà, a word-collage. A poem-assemblage. A complex work made from common TV jabber-flotsam. A couch-potato mash-up, you might want to call it, and a mighty tasty one at that.

Although just about anyone could re-order this stuff, not everyone can do it really, really, well. Just as, for example, Max Ernst and Bruce Conner (along with a few others) tower over others in their compositional and scissoring skills when making collages from old engraving images taken from nineteenth century newspapers, sales catalogs, and books: 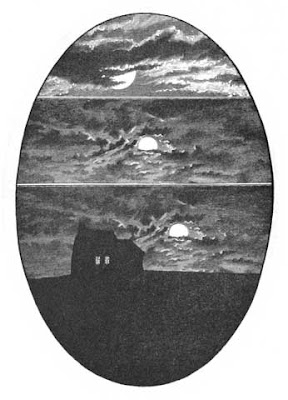 Bruce Conner
Untitled, from The Ballad of Lemon and Crow
(Arion Press, 2002)
so too do poets and writers possess different skills in assembling found or appropriated words.

Nathan Austin puts his lifted-from-the-Feud words together really, really well. His “re-ordering,” in a word, “rocks.” 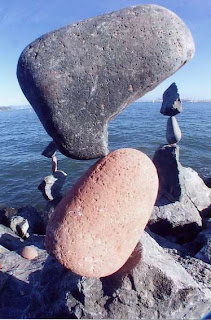 Bill Dan
Stacked Rocks, Sausalito, CA
What’s wonderful about Austin’s re-ordering can’t be fully explained, of course, but a few techniques are apparent. First, and foremost, are the classic poetic techniques of repetition, rhyme and quasi-repetition, quasi-rhyme. Simple techniques but how powerful they can be. Here are a few sentences from the bottom half of the poem’s first page (click to enlarge in a new window, if you prefer): 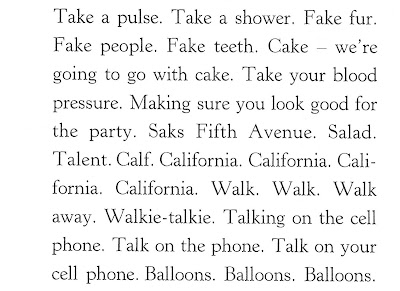 This language just flows. A strong current carries you away from yourself, into the text, into each sentence and each word, pushed and pulled along by the repetition and rhyme – true rhyme, near rhyme, eye rhyme, and who-knows rhyme – mostly at the start of the sentences, and sometimes involving only parts of words: Take-Take-Fake-Fake-Cake-cake-Take-Making-Saks-Salad-Talent-Calf-California(x4)-Walk(x2)-Walkie-talkie-Talking-Talk-Talk-Balloons(x3). It’s odd, but it works, probably in part because it’s unusual. The sentences just go and go, for 51 pages, all as above fully justified on both the left-and-right margin.

It’ll probably take you about two hours to read the poem clear through, even on re-read and savor mode, and you won’t get bored. In addition to his skill at stitching together the words, Austin has an advantage here with the source “text”: the contestant answers make for mighty short sentences, sentences often of just a word or two and only rarely with a subordinate clause. Punchy. Quick. Next.

But also: the short sentence – at least the one-worders, when repeated – foreground words as objects, not just signifiers, as in this line of five sentences from near the middle of page 45:

The effect on the mind of these repeated word-objects is similar to that which can happen with Aram Saroyan’s single word minimal poems, in which (to use Clark Coolidge’s construct) the words “start to look like a funny little animal[s].”

However, the repeated words can be read purely as signifiers too, delicious, nutritious, and ambiguous ones at that. Take the “Apple . . . ” example above. Are we reading about fruit, computers, an ineffectively bowled ball, or secobarbital capsules? Or does one or more “apple” act not as any of those nouns, but as a verb meaning “to foster a positive emotional connection between an individual and a specific information technology device, solution or service”?

Sometimes the energy in Survey Says! comes from Austin stringing together sentences/answers which begin with the same prefatory words, the words Family Feud contestants often begin with, when asked for their answers. Thus there are long sequences in which each sentence begins with phrases such as: 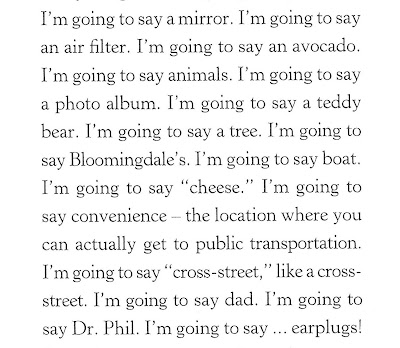 It’s a paratactic wonder-land, I do believe. After the mantra of the repeated introductory words, the noun-based phrases range marvelously far-and-wide, even as they proceed alphabetically. Who ever the hell said watching TV will rot your brain?

Sometimes the connective thread between the sentences seems invisible, and may be non-existent. These passages might be the most fun to read: 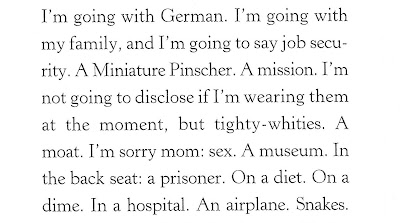 That’s from page 37. Reading this, I puzzled first about whether there is some unifying lexical connection. There doesn’t seem to be much. But my brain, reading, and re-reading, keeps looking, and then all sorts of tendencies begin to storm from within onto the page, into and around the sentences. Apophenia, the Forer (or Barnum) effect, delusions of reference, the parsimony principle, conspiracy theories: all that and more swirl and percolate the text.

And so one moment I’m wondering if each of these answers set out in the passage might be a response to one particular survey question (impossible, but still), while the next I’m hypothesizing that Austin has purposefully jumbled answers or that they appear together only because of a publishing glitch. Jokingly, I assert that the passage sets out the sub-conscious thoughts that undergird the first eight lines of the final chapter of Joyce’s Ulysses: the ur-thoughts, so to say, for Molly Bloom’s reverie-stream. Your reading, of course, may vary, and mine may too the next time through. That multiplicity of possibilities signals a first-rate poem.

+++++(+++)+++++
Survey Says! appears to be a do-it-yourself, publish-on-demand book, which I say not because I disapprove of such things – quite the contrary – but to remind that you’re not going to find this in your local bookshop, Small Press Distribution, or even direct from the publisher. It is available via Lulu, either direct (click here), or via an order through Amazon.com (click here). If you order it - and you should - it’ll take a couple days for the book to be printed up. All in all, you’ll have Survey Says! in about a week. Then, of course, the book will have you forever.

Survey Says! could be – should be – a big seller, both here and around the world (the latter, of course, would require translations). Family Feud in the local language has aired or is currently broadcast in almost three dozen countries, including Mexico, India, Indonesia, Brazil, Russia, and Tunisia. The potential here is huge, eh? Maybe I ought to survey one hundred people and ask them . . .

some but not all of the countries
(Russia and Tunisia, for example, should also be colored red)
in which
Family Feud, or a Feud-style show,
is broadcast on TV

It's like blogs can be useful for things. This review (and site) reminds me that some people are using the internet to publish multimedia works worthwhile.