What I Did On My Summer Vacation
A loon, alone. Some Trees. A pear tart and a single shot of espresso, please. Where the big maples overhang the channel, count the shades of green. Float, preen, dance, lift-off. As he walks up the aisle to the chuppah under which his only daughter will marry, the father thinks of what Neil Armstrong said on the moon. The egg white omelet, please, with real tomatoes, not sun-dried. Millfoil tangle, millfoil thicket. Harriet has a robot that eats the stuff. A beanbag toss may sound easy, but try under-handing the thing into a five inch hole from twenty-five feet. Bianca holds a lute, right next to her mother, who looks annoyed. To stop traffic in the city, turn a twenty foot canoe upside-down, balance it on your shoulders, then jaywalk. Mazel Tov!

Lucia’s, not Chico Lico’s. By late afternoon, the foot wash basin at the top of the stairs is as sandy as the beach which it adjoins. Almost 100,000 people attend the state fair every day, and some of them line up to buy deep-fried cantaloupe on a stick. Others do the same for pot roast sundaes. Rivers and Mountains. k+ l. An oak barrister bookcase, five doors with beveled glass. The candy table. The Saint Croix has waves and divides Minnesota from Wisconsin. Origami. When paddling a canoe, keep your arms straight. That’s Van Gogh, not Birger Sandzen. The three bookshops in the airport each display a few dozen new releases, larger numbers of paperback mysteries, romances, detective stories, how-to’s and travel guides, and four shelves of “classics;” among the latter are the only three poetry books for sale: The Illiad, The Odyssey, and Leaves of Grass. A star sapphire. 100-N to Excelsior. A pink sun.

Eight men lift the upholstered white arm chair in which the bride is seated, another eight do the same with the matched chair in which the groom sits, and the two bounce and dance above the crowd that with hands joined circle around them, sometimes fast, sometimes slow, alternately surging close to then moving away from the hoisted couple. Joy-shout, foot-stomp, around, around, around around around! Hava Nagila! The white cloth napkin, held by the newlyweds between their right hands, somehow does not fall. Hava naglia ve nis’mecha! Sweat. Sweat. Sweat, sweat, sweat!

Wilbur Foshay built an office tower shaped like the Washington Monument, with an exterior of brown-yellow limestone and prodigious amounts of mahogany, marble, and bronze within, plus impressive fixtures and embellishments of the kind we now call Art Deco. He put his last name, in ten foot tall letters, on all four sides of the building, 27 stories above the street, and had John Philip Sousa compose a march for the opening, at which it was performed by a 75 piece band. Two months later, Foshay was bankrupt and soon thereafter convicted of mail fraud (a pyramid scheme) and given fifteen years in federal prison. Three years later, FDR commuted the sentence, and in 1947, Truman pardoned him. Foshay today is a luxe hotel and the trip to the observation deck costs eight dollars.

Loxodrome. If you want the tandem canoe to steer a relatively straight course, don’t have the novice paddle in the stern. Turtle Bread. Marley’s upgrade. Six feet square, alternating horizontal bands of white and the palest blue. The dog curled in the corner that looks asleep is actually a taxidermic illusion. A dead owl stuffed, the wall text claims, with tourmaline and rubies. The red divan and drapes that open on windows that look out on windows. The State wants the Supreme Court to stay the order requiring a plan. The massive old radiator, a magnificent Chrysler Building in the south-east corner of the dining room, no longer works. Fair weather cumulous clouds. After being formally announced, the two walk into the ballroom to applause and toast each other with flutes of champagne, a single raspberry in each glass. They cut the cake. A ski jump.

The smell of lake, weedy and benthic, on the bathing suit that hangs from the shower hook. A salted nut roll cures mild hypoglycemia. Every day, the green apple tempts. Absolutely no smoking, the signs say, but who can deny Argentine cigars at midnight. Room 440. First, a soft fold with a one-sixteenth inch overlap, then a hard fold, made with a scoring tool, along the same crease. Zen repeat times 125. To stop traffic in the city, have the bride, in a cream-colored Vera Wang, and the groom, in a black tuxedo, jaywalk from the grassy lake-shore to the concrete center median and kiss while dozens applaud from the second floor terrace above the street. Many call the lift bridge draw bridge. Suite dreams. There, between the branches and shrubs. 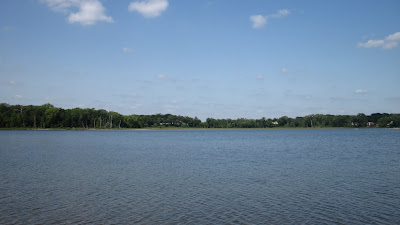 I enjoyed your epithalamium. It has been many years since I have heard the word millfoil. It's one of the things I associate most strongly with Minnesota and its gazillion lakes. The whirligig of your words tickled me silly into a laughing gardenia.