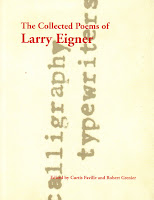 The Left Margins were out here

as Eigner typed them on his page


so I read
and stop.

(and no guide to what’s newly published)

UPDATE: March 26, 2010: As I read The Collected Eigner, I still find that thoughts of where the words should be on the page too often overwhelm the reading of the poems themselves. This is especially so for poems remembered from the Black Sparrow and Elizabeth Press books of the 1970s and early 1980s, or ‘zines from that time, which featured Eigner’s left-side starting point margins as he mostly typed them, at distance from the page edge. The frustration of seeing these margins moved so close to the left-side of each page in the Stanford volume still makes me close the books on occasion, sometimes emphatically so.

But Eigner’s poetry always draw me back. And so I open the books again, and read and read, until the margins frustration becomes too much. By this start-and-stop-and-start-again method, aided considerably by several sleepless or sleep-short nights (a few caused by my despair at the shifted margins, I kid you not) and more than once carrying a volume with me for a 30 minute each way commute to work on BART, I’ve read through The Collected Eigner, and re-read much of it multiple times.

+(+)+
Before celebrating more (and of course I’m still reading (and, due to the shifted margins, stopping), and will be for some time, there are more than 3,000 poems) I need to – sorry, folks – point out a minor but unfortunate production error in The Collected Eigner: a page of poems is repeated, and as a result two poems are missing. I’m hoping the editors and publisher can remedy this, and I think they easily can.

Here are the details: In Volume III, the same three Eigner poems are printed on both page 1074 and page 1174. Eigner’s numbering of the three poems (# 812a, # 812’, and # 812’’) makes clear that when they first appear, on page 1074, they are out of order (they are preceded and followed by ## 623 and 626, respectively). Eigner’s numbering also makes clear that poems ## 624 and 625, which should appear where the three erroneously placed poems are printed, are missing. Unfortunately, The Collected Eigner does not include these two poems.

While unfortunate, this kind of repeated page sometimes happens in projects this large. I’ve seen similar screw-ups two or three times in the 25 years I’ve received the annual desktop edition of the California Penal Code, which runs over 2000 pages. The legal book publisher always uses the same solution, and it’s one that I hope Stanford can use here.

An insert page should be printed that contains the two missing poems (# 624 and # 625). The page should be a bit smaller than the pages in the book, so that it can be laid or tipped in, either at the front of the volume, or at the actual page, without hanging over the existing page ends. Alternatively (and this is what the legal publishers do), the reverse of the page with the correct, replacement text should have a peel-away, non-acidic, adhesive backing, so that it can pasted over the erroneously repeated poems on page 1074. This insert or sheet, of course, should be made available to those who bought The Collected Eigner. 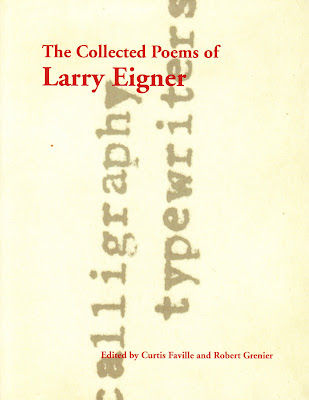 thanks a-lot. I was gonna mention

(in my usual, noh nonsense style):

Michael Davidson "got" to it nicestly as did d Cid Corman..

Tom Hibbard also has a nice essay re:

THE SAME OLD THINGS: The Poetry of Larry Eigner

which I am finding out just since 1998 or so...prior to then all I knew was LE's

Things Stirring
Together
or Far Away


any anyway: thanks for "stirring the soup" as it 'thickens' will add a pinch of (Kosher) salt, pepper

"mine are the Lightest!"

so I looked in on Corman/Eigner "stuff, here:


and was suddenly struck... Cid and Larry most corresponging by numbers of letters continuous...

check out( and these are incoming to Larry from Cid):

1. see what of mine is there

That's a huge cache of letters from Corman, to Eigner, in the Univ. of Conn Special Collections Dept (the Dodd Center). And all before 1970!

Eigner's letters, as in some of his prose (leaving aside the fiction here) tend toward an associative freedom that I also enjoy in the poems.

Which brings me to the question: where are the letters from Eigner to Corman. They don't seem to be in Corman's papers at Kent State, Indiana (the Lilly), or the Dodd Center at U of Conn.

Nor does it appear, from the on-line listings (finding aids) to Eigner's papers at Kansas and Stanford, that Eigner kept copies of what he sent out.

I hope I'm wrong about this, by which I mean: I hope somebody knows where to locate the letters, or some, from Eigner to Corman.

was out at the Lilly Library a couple of years (same summer that Mrs. Lilly got an hor-rare-ee-um.. or something) ago to get copies of what was there of mine about 425 letters, aereogrammes, drawings,mss, etc)

a great many boxes of Cid's "stuff"..

there are some (many6) Eigner letters/stuff there which I presume are incoming to CC:

I suppose someone or some-ones are "sitting" on things...

(or any-other "club"... for that or any other matter

... SHIT: even The Outsiders I remain outside-of..

I could continue. however. I gotta pee!

I could give you a name of a person who might have a "clue" however,
this is too public a fore-arm and I continue to think that I ame jus'
righting one-on-one letters but now realize that 1.3 million people a nano-second are reading this...


you can read things if you wear cotton gloves and keep the noise don..

nice folks at the Lilly Library... and, the Kerouac scroll (that the dog ate the last little bit of) is in the basement