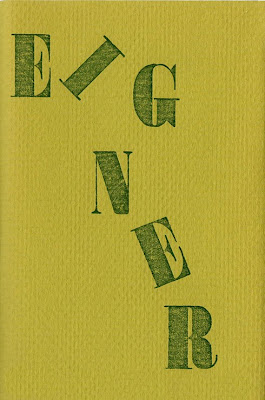 Before, within, and after any readers’ responses to Larry Eigner’s work – including those of poet-readers (click here) – are the views of Eigner himself. A poet’s statements aren’t the be-and-end-all, but should be given serious thought. They can also serve as a kind of lens, an often clarifying one, through which to read the poetry. (Some of that is done in another post, on Eigner’s poems form the news, which you can find here, if you please.)

I present below a kind of bouquet of Eigner’s own words, more or less directly about his poetry. Perhaps this will be a joy to read, show something about Eigner and his poetry, whet the appetite, and provide a kind of platform upon which to read at the poems. Get thee, if you can, into the gardens (the poetry itself), and see what you think. Here’s Eigner, on Eigner:

I thought myself that immediacy and force have to take precedence over clarity in a poem . . .

. . . so the poem does become a thought process or arc or course of thought or trace or artifact of the same, maybe more than a machine made of words.

I'm cautious, and come onto things by understatement. Wary of exaggeration. Sotto voce has resulted in the suppression of words.

. . . eliminating connective words (more and more in my head, automatically, less and less after writing them down) to keep up the movement, the force . . .

. . . the less of a margin the less set and rigid a poem appeared, the more easily it seemed, seems, to come off the page into speech, into the head: so too, I've generally chosen not to put a word flush with the word above it, even a few lines above it . . .

And beyond technical skill have felt some good poems from my life, which is likewise a matter of luck. I try to make the punctuation, including spacing, distancing, as good as I can. Else I am dissatisfied.

If you are willing to stop anywhere, anytime . . . a poem can be like walking down the street and noticing things, extending itself without obscurity or too much effort. [ . . . ] Trying too hard gets you nowhere, you can only do about the best you can . . . .

Accuracy of the moment, whenever one comes, is the greatest you can have.

My eyes still big for my head, most things were always tantalizingly beyond or almost beyond sight and hearing, out of reach, I’ve had quite an impression of this anyway, and often enough of barely managing to reach/grasp things when I have, no doubt due to inability to explore much on my own from babyhood on, my curiosity exacerbated, as I got cerebral palsy when I was born.

Especially before the cyrosurgery that tamed my wild left arm and leg – in September ‘62, 5 or 6 weeks after I turned 35 – in order to relax at all I had to keep my attention partly away from myself, had to seek a home, coziness in the world.

. . . for quite a while I’ve realized the priority of immediacy and force over understanding, as to a poem, you don’t have to get every detail, reference, in order to get a lift or whatever from it . . .

A poem can’t be too long, anything like an equatorial superduper highway girdling the thick rotund earth, but is all right and can extend itself an additional bit if you’re sufficiently willing to stop anywhere.

Distances between words are not negligible elements of a piece: pauses or silences.

. . . the indents and other spacings becoming distancings, not in a derived way, but directly realized. [ . . . ] You play and feel your way by eye and ear.

And no poetry can raise anyone’s hopes for a medical cure, say, or any sort of miracle. Just “refresh the eyes / against the abyss,” as I’ve said in a poem . . .

I can’t skip about, yet curiosity pulls me about. It has led me on to see what’s next.

I in brownian motion, attention given according to occasion, serendipitously . . . .

I'm still kind of tantalized in all directions.

And to name is to destroy, yes, or at least to transfix or petrify. Mentioning or referring to things is better than naming them.

. . . people, occupied with one thing or another (cars, stereos) look around them less and less.

Obviously, I’ve not sourced each specific quotation, but would be happy to do so if anyone’s curious about something in particular. Although I tried to not duplicate matters, a few things are repeated or almost so. Eigner sometimes quoted himself, and my view is that if Eigner said something more than once, or in slightly different ways, it was probably particularly important to him.

+(+)+
The image at the head of the post is adapted
(read PhotoShopped)
from the cover of the beautiful Burning Deck
edition of Eigner's poetry, titled
lined up bulk senses
and which was published in 1980.
+(+)+ 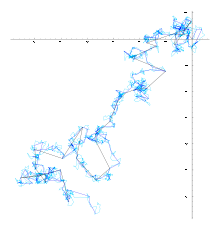 isn't that (and the others' you "use"/quote out of) letter to Ina Forster NEAT!

I found LE's letter to IF (who was an undergrad-student who, somehow must have been her "hep" (poetry) teacher, she, as I recall, was doing a paper on Eigner's work, on The Net and printed it out and
'tucked-it-in' -between my Eigner and my Ted Enslin 'stashes'

(hey, this is first time I am using a recent photo (attached) of me..

taken last June by Jan Perlman when she and John were visiting..

:an huge pregnant fly
just, motionless
sitting there
(seemingly) waiting to be swatted...


nice entry today, SF... certainly extending us into The Nitty-Gritty of