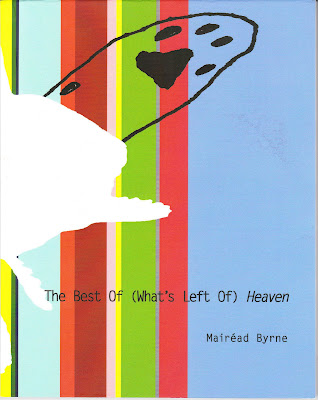 The Best of (What’s Left of) Heaven
Mairéad Byrne
(Baltimore: Publishing Genius, 2010)
The energy of the poetry universe, no less than in the universe itself, is an ever-present cavalcade of astonishingly diverse ways and forms. Every poetry collection harnesses a bit this awesome procession, and better yet, adds to it: poets are dynamos that generate amperes and joules, each charged by their own particular flow.

Such were my thoughts upon reading the just published The Best of (What’s Left of) Heaven, by Mairéad Byrne. With 208 pages and only slightly fewer number of poems, the energy here is huge. It’s also spectacular, including irresistible. I received the book in the mail this past Friday, started it that night, read more early Saturday morning, finished it that night, and immediately started in again. I’ve already book-marked dozens of pages, so as to more easily return to the poems that really, really send me, and I add more every time I re-read the book.

A few months ago I came across the e-chap version of Byrne’s State House Calendar, and really liked it (click here to read what I wrote about that poem). At around the same time, I discovered her blog (called “Heaven”), on which she’s been posting poems – her own – for the past seven years. As its title indicates, The Best of (What’s Left of) Heaven prints a selection of poems from the blog. It’s important, I think, to get these poems into print, especially given how hard it is to find particular posts in Blogger (its search function is very spotty). Plus, it’s nice to have a real book to have at hand and carry around. 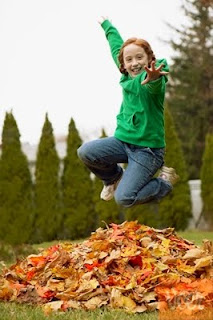 “I just want to kick the leaves
& have done”
Byrne largely puts her poetics heart right (write) on the page:

DONALD HALL WOULD HATE ME

if he knew me
I don’t want to be great

it takes me 10 minutes
to write a poem

I want to whisper or
shout it about
town

I just want to kick the leaves
& have done

As you may know (although I didn’t at first), the reference to Donald Hall in the title in part relates to the “kick the leaves” lines in her concluding couplet. Hall has a poem titled “Kicking the Leaves” that begins with him doing just that, an act that results in a seven-section, three plus page poem that to me is more than a bit over-mannered, sentimental, overly-meditative on subjects as large as death, and interminable (click here to read Hall’s poem). Byrne of course, with her “have done with it,” takes a far different approach with her leaves.

Although many-chaptered (in its way), this particular ars poetica doesn’t cover everything. Byrne’s poetics contains multitudes. In addition to what she says above, Byrne in other poems in the book explicitly or implicitly establishes that when it comes to poetry she’s “profligate” (her word), free-spirited, enthusiastic, funny, deeply caring, and smart. She’s also a true believer in poetry, both as a independent power and as a sun in her world. Maybe most important, Byrne sees poetry – finds it – everywhere, in anything.

I could show you exactly how all this is so, by setting out and discussing poem after poem from The Best of (What’s Left of) Heaven. However, that would be overly lawyerly, a trait which has its place but not here, not now. Besides, I don’t want to spoil the fun you’ll have once you get the book (which I do hope you will do).

Nevertheless, in the sections of this post that follow, I will unpack a few of the above-listed characteristics of Byrne’s poetry, using to illustrate and discuss the matters a few of the poems that on first reading particularly popped my eyes stuck in my mind.

+(+)+
The first thing I want to stress is Byrne’s “everywhere” and “anything” conception of poetry. She has, for example, poems that stem from observations of daily weather, incidents of daily life in the city (Providence) where she lives, and things that happen in her home and where she teaches. And poems too that come from the obituaries in the paper, or taxidermy manuals, or a speech by Martin Luther King. Poems that instruct, poems that are dedications, poems that spin the language of the everyday dross into lines of silk, and, . . . do you see what I mean?

Let me elaborate a bit more. One of the poems in the book, PLANNING THE POETRY READING (Byrne’s titles sometimes are all caps). It seems to be a kind of set-list for a reading. It consists of 18 lines, most of which begin, “A poem about . . . .” After that or a similar start, each line then gives the basic subject of each of the poems that Byrne would presumably recite at the reading. The list includes poems about “glorious routine,” “poverty,” “being a single parent,” “metaphor,” “Louis Armstrong, ” and “a scrubbie,” plus about a dozen other different things. This is a very wide range of topics and sure enough such poems, and plenty others on plenty else, can be found, either in The Best of (What’s Left of) Heaven or Byrne’s other books (see in particular Talk Poetry, her 2007 collection of prose poems).

Byrne’s seeking and finding of poetry everywhere becomes contagious. I kid you not, after reading Byrne’s book early this morning I saw a poem in the toothpaste cap, felt another in the scrape of the razor, and heard still others almost everywhere. 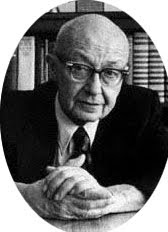 Charles Reznikoff
Byrne’s a big fan, I do believe, of Charles Reznikoff’s work. One poem in the new book takes the form of an (imagined) short interview with him. Byrne elsewhere has said that she’s surprised “that Charles Reznikoff isn’t more of a household name,” and an on-line syllabus of hers (she now teaches at the Rhode Island School of Design) includes selections from both Testimony and Holocaust, Reznikoff’s poetic re-castings of facts found in legal reports.

I too love Reznikoff (click here for an example of that). And so you can imagine how much I enjoyed the following poem in The Best of (What’s Left of) Heaven, given that it is very close to the vision and method of objectivist concision the Reznikoff worked so well. Of course, Byrne’s poem arises from her own particular experience, but it nicely works in the just-the-facts, so-much-depends-upon tradition. Here it is, title and text:

This little poem, beautiful as can be, doesn’t need much analysis. I love that there are two intersections, one at the street where the poet waits, and the one comprised of what the poet sees both there and in the mind. Excellent too is the visual poetry of the double-hyphened line, its look reflecting neatly that which it describes. 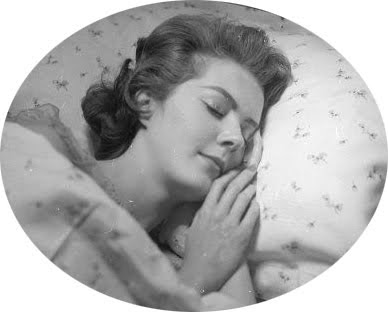 “In-flight movies!”
Now who doesn’t like a good night’s sleep? Byrne sure must, that’s for sure. Here’s a poem that takes the form of a series of advertising hype-slogans that in this instance are actually true. It’s also a poem that shows well Byrne’s humor, energy, and enthusiasm:

Free of charge!
Luxury item!
In your own home!
In-flight movies!
No skills needed!
Be your own boss!
Better than sex!
No calories!
Fat-free!

This poem appears in “everyday lunacy,” an early section of The Best of (What’s Left of) Heaven. Towards the end of the book there’s another section, titled “everything unlikely,” that contains almost two dozen prose poems. One of those has a few sentences that I think carries forward the celebration of slumberland that is SLEEP! In her prose poem, titled TIME, Byrne has a paragraph that focuses specifically, and winningly, on the hypnagogic, that state between waking and sleeping championed by, among others, Edgar Allan Poe:

When I go to bed early, time is a smooth table, with the prospect of music, books, poems, sleep, hovering like blimps above it. Sitting on the doorstep of sleep is the greatest luxury. The sun always shines in that country. The stoop is so bleached with it, it is made of sun.

Now that’s one fiery way to see that moment when we fall to sleep, to envision the threshold where – to quote Poe – “the absoluteness of novelty” blazes, and imagination can fully shine.

Given the month that Byrne’s book appears – that’s this month – it’s especially appropriate to look lastly here today at a poem titled “light in april.” Really, though, I’d put it here anyway. It’s a beautiful looking poem, spread over two pages, and beautifully made too, built of observations presumably made over the 30 days of some April past. Here’s the poem’s text – please click on the image to enlarge, and forgive the fuzziness of the scan: 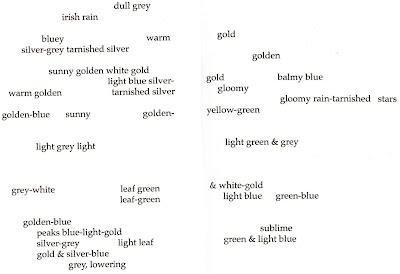 This poem – “light in april”– radiates Byrne’s intelligence, the quality and skill of her eyes, mind, and writing. I believe fully the many-faceted range of illuminations – mostly tending towards the resplendent but sometimes dreary enough – that Byrne reports here, and which I have no doubt she saw and felt day-to-day. As I previously wrote when discussing Byrne’s State House Calendar, I love poets who in the words of Frank Samperi “mind the light.” Byrne here certainly does that, gloriously so.

+(+)+
There’s plenty other poems in Byrne’s book with spirit, skill, and energy similar to those I’ve discussed here. This post could continue for at least another dozen sections, discussing two or three poems in each. I think though that my point has been made. But just in case, permit me please to summarize, via the following bit of rhetorical call and response:

The Best of (What’s Left of) Heaven? 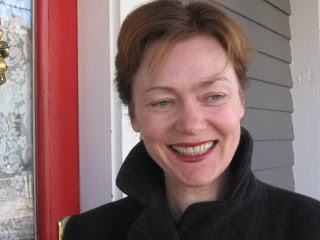 "poets are dynamos that generate amperes and joules, each charged by their own particular flow."

Octavio Paz would say these joules are the product of an alternating current: language destroying and creating itself as it goes along, generating its peculiar energy, light bulbs and brains, driving vacuum cleaners and steam irons, metaphors and symbols, coffee grinders and the voltage of revolt.

This was a great review, Steven. You really have a knack for the visual layout of a blog post; the way you combine images and excerpts throughout the review really made it a pleasure to read.

And you are absolutely right - Mairead's poems have spirit.