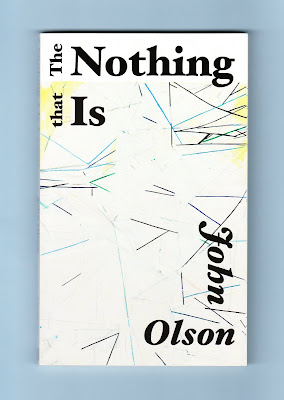 John Olson
The Nothing That Is
(Ravenna Press, 2010)
John Olson’s recently published The Nothing That Is – a putative “novel” that’s in fact an autobiography written in the second person – shows again why I’ll follow him – his writing – anywhere. What an engaging and fun 150 pages, and oh the bits about poetry, and oh the poetry in the prose!

Because it’s written in the second person, The Nothing That Is comes across as a book that’s about you, the reader, while of course it’s really about Olson, the writer. The constant effect is to get you, the reader, to think about whether you agree with what’s said about you, and thus to get you (the reader) right there next to Olson’s views, experiences, and ways with words. Here are four paragraphs from very early on:

You find bark grandiloquent with texture, like skin.
You once enjoyed imbibing spirits but they got the
better of you, and it was either bid them goodbye, rid them
from your blood and being, or become a blob of mucous and
protoplasm erupting in vituperation at invisible interlocutors.
You hate cars. They are destroying the world. But you do
love your own car, which is small and red.
You have never seen an armadillo on a Texas highway
because you have never been to Texas, but you have seen deer
trot across a dirt road in North Dakota, an owl swoop down
against a red sunset in eastern Washington, a hawk circle a
meadow of cottonwood and poplar with the Wasatch range in
the background, and a fish of unknown identity leap, suddenly,
from Moses Lake on a bright summer afternoon.

See what I mean? What do you think, how do you feel, about, bark, drinking alcohol, and cars? What animals, birds, and fish have you seen while driving? How would you put those thoughts and experiences in words? Olson in this way strongly exploits the implicit second person narrative tone, not so much the accusatory facet of that, but that which places the reader in unfamiliar or new circumstances. Throughout the book, you are there, with him, in his life. It’s invigorating, and of course also banishes entirely the “I” which egotistically grates in many autobiographies.

The Nothing That Is was written and mostly covers events over several months in 2006, although naturally enough much from Olson’s past gets mentioned or recounted. As such, you’ll learn a bit about his mom and dad, how he met his current wife, and the details – strangely fascinating – of how he waits for her to get off work in the parking lot of the supermarket in which she decorates cakes. You’ll find out what he thinks about SUVs, hip-hop, apathy, noise, his neighbors and a hundred other things. You’ll read about the time in 1966 he bought Jimmy Page (yes, that Jimmy Page) a Coke, the habits of his cat, and the invasion of carpenter ants in the building where he now lives. Digressions musing on, for example, the postman’s hands, the car Montaigne would drive, the full moon in the daytime sky (Jack Spicer comes into that one), and how resignation can be a wonderful thing. All this, as they say, and more. In short, if you want to get to know John Olson – and heads up to those in New York City, he has a Poetry Project reading coming up this fall – this is one tremendous introduction.

The Nothing That Is mostly takes place in Seattle, where Olson has lived for decades, but there’s a great 35 page swath just after the middle of the book – so engaging it almost serves as the novel’s centerpiece – that concerns a road trip to Missoula, Montana. Also, while place names remain true to the actual, most people mentioned are given swapped out names, in the manner of a roman à clef. However, some of these – such as Olson’s wife, and the poets Andrew Joron and John Yau (for whom Olson provides tremendous capsule descriptions of their writing) – are fairly easy to decode.

The book’s title comes from the final words of Wallace Steven’s great poem, “The Snow Man” (the poem’s set out in full opposite the first page). I can’t here fully boil down Olson’s concept of “the nothing that is” but it does – per what’s in the book – relate to Zen no-mind:


You try not to make judgments but focus intensely
and openly at what is there, there in its actuality, there
without any overlays of personal value, skewed perceptions.
The dimming light of late afternoon in late winter, the yellow
arrows of the parking lot, one curving round the other two
pointing straight ahead, the imperceptible changes in the
clouds, the crown of the Space Needle poking above Fed
Ex Kinko’s, the light distortions of repaired dings in the
windshield, the diamond pattern on the wall of the drugstore, a
flock of seagulls, the pliable indentations in the steering wheel
that are nice to squeeze, you absorb yourself in all these things
and try to bring some peace into your body, some detachment,
some compassion, not to have any thought stirred by the
outside conditions of life, good and bad.

Sort of the flip side to this no-mind ideal is anger and rage. Olson has his moments this way, and those moments are INTENSE. The upstairs neighbors are particular focal points, and at times it scares me how mad Olson gets (the provocation can be severe). Olson never acts on what goes on in his mind, questions sincerely and smartly the hows and whys of it, but if his thought-dreams could be seen, they would indeed probably put his head in a guillotine. It’s pretty courageous, I think, for Olson to show this much of this part of himself.

Among all else in The Nothing That Is are several passages directly about writing, and the writing of poetry in particular. Olson at one point in the book just comes right out with it, stating in no uncertain terms what it is he’s looking to do with poetry, and how it differs from what else is out here:


[ . . . ]        You favored a type of poetry that
was wild and surreal. A poetry full of phantasmagoria and
fugitive meaning. The poetry of delirium. A poetry that did
not point in one direction but in many directions. A poetry
that capitalized on the inherently hallucinatory properties
of language. It had been your experience that most people
did not care for this type of poetry. People preferred a more
transparent poetry which presented a single lyrical emotion in
an anecdotal setting. The bland and acceptable poetry which
was generally featured on NPR, read by Garrison Keillor, and
got all the NEA grants.

Olson a bit further along also describes his approach in an equally tasty, but perhaps more bite-sized set of two sentences:


[ . . . ]    Writing things that do not instruct or inform so much
as diffuse into the blood and nervous system creating feelings
of disquiet and euphoria. The sound of heaven made actual as
skin.

And then, also further along, there is the following passage that’s a bit – make that a lot – more tactile and poetic, and thus which while explicating the approach to writing also imparts the wonder that comes when Olson works the words right:


Your day is a long monologue. Words galore. Your pen
is a leopard moving with stealth through a lush vocabulary of
brawling vines and exotic bullfrogs. You are Prospero with his
staff. You conjure storms and diatribes. Truffles and diamonds.
Fables and ferns. The machinery of signification. Monsters of
howling malcontent. Maraschino dots like scabs of coagulated
thought.

Storms and diatribes, truffles and diamonds, fables and ferns. Hmmm, and yes, I think that, the series of coupled nouns there, just about covers it, says just about exactly what you’ll find in The Nothing That Is, a novel autobiography that’s everything I hoped it would be.

[recited by James Merrill]
+(+)+
John Olson regularly posts his reviews and prose poems at Tillalala Chronicles. Other recent prose poems by Olson are posted at Alligatorzine. I’ve previously published Olson’s essays on, respectively, aliteracy, extreme reading, and hard-copy books, and have previously written on Olson’s non-literary essays, his poetics, and his most recent poetry collection, Backscatter. Another collection of Olson’s poetry, titled Larynx Galaxy, will be published late this summer by Black Widow Press.