Harry Crosby and "Chasing the Sun"


Richard Cohen’s Chasing the Sun (2009) is an “information-packed miscellany on solar worship and solar studies,” in Booklist’s words.  It’s easily the best recent general book on our Daytime Star.

Being a “miscellany,” the book favors breadth over depth.  Unfortunately, this means apt details are absent at times, dulling the presentation.  For example, the Egyptian pharaoh Akhenaten is gets but a single sentence, in which it’s stated The Sun was an “all-embracing diety” during his reign.  That’s true, but there’s no mention of Armana, the city he had built where temples and doorways were positioned catch the rays of the morning sun, or of the “Great Hymn to the Aten,” the beautiful paean-poem  to the sun-disc god (sample line: “Earth brightens when you dawn in lightland”) attributed to him.

The book’s treatment of Harry Crosby – five paragraphs over not-quite-two pages – is another example where a few more salient facts would have greatly brightened Chasing the Sun.  Crosby, called a “sun worshiper” and “fervent apostle of the sun,” is rightly included in the book, which includes a compact summary of his life, including his obsession with death and suicide.

It’s also said that Crosby “develop[ed] an obsessive interest in imagery centered on the sun which he introduced into his own writing with a vengeance.”  Crosby definitely did just that, and it’s a key point.  But the book’s explication here is superficial.   As supporting examples of the obsession, Cohen simply references and explains a bit of the symbolism of  “Black Sun Press” (Harry and his wife Caresse’s publishing company), then name-checks three Crosby book titles (Chariot of the Sun, Shadows of the Sun, and Transit of Venus) that reference The Sun or solar activities.  These examples strike me as obvious and inert.

Most glaringly, Cohen fails to mention let alone describe “Sun-Testament” and “Madman” (aka The Sun), the two stellar examples of solar-saturated Crosby poems.

“Sun-Testament” is a prose poem in the form a will (the legal document disposing of one’s estate upon death).  As the title implies, it’s the imagined last will and testament of The Sun.  It was first published by Crosby in the collection Chariot of the Sun (1928) then expanded, revised, and republished as such in Mad Queen (1929).   In addition to introductory and concluding paragraphs that mimics or echoes language typical in a legal will, the poem in its revised version contains twenty-eight numbered codicils, each of which reflects on, or is emblematic of, Crosby’s creative energy including, for example (remember, the sun is the “speaker” in the poem):

EIGHTH, I give and bequeathe to the planet
Venus all my eruptive prominences whether in
spikes or jets or sheafs or volutes in honor of her
all-too-few transits.
. . .

FIFTEENTH, I give and bequeathe to Icarus a
sun-shade and a word of introduction to the Moon.

EIGHTEENTH, I give and bequeathe to Arthur
Rimbaud my firecrackers and cannoncrackers,
to Vincent Van Gogh my red turmoil and hot-
headedness to Stravinsky my intensity and fire.


Gregory Wolff, who long ago now wrote what remains the definitive Crosby biography (Black Sun, 1976), opined (see page 7 of that book) that Crosby “was a wizard with figures, conceits, lists, [and] correspondences . . . .”  The fanciful and elaborate list-poem “Sun-Testament” is surely an example of the masterful at times magical intelligence of the poet.

“Madman” (aka The Sun) obviously draws its inspiration from a passage from the “Ithaca” episode of James Joyce’s Ulysses, in which the narrator provides a lengthy catalog-list answer to the question, “What in water did [Leopold] Bloom, waterlover, drawer of water, watercarrier returning to the range, admire?”  The answer beautifully sets forth various features and qualities of water.

Crosby’s prose poem in a similar way expounds upon The Sun, for approximately 100 clauses, each separated by a well-spaced colon, thus giving each discussed quality or feature a kind of stand-alone forum of its own while keeping the reader’s energy moving ever-forward.  It totals a bit more than 900 words, and here’s a taste, from the very start, and then from towards the end:


When I look into the Sun I sun-lover sun-worshipper sun-seeker when I look into the Sun (sunne son soleil sol) what is it in the Sun I deify —
His madness : his incorruptibility : his central intensity and fire : his permanency of heat : his candle-power (fifteen hundred and seventy-five billions - 1.575.000.000.000.000.000.000.000.000.) : his age and duration : his dangerousness to man as seen by the effects (heatstroke, insolation, thermic fever, siriasis) he sometimes produces upon the nervous system : the healing virtues of his rays (restores youthful vigor and vitality is the source of health and energy oblivionizes ninety per cent of all human aches and pains) : his purity (he can penetrate into unclean places brothels privies prisons and not be polluted by them) : his magnitude (400 times as large as the moon) : his weight (two octillions of tones or 746 times as heavy as the combined weights of all the planets) : his brilliance (5300 times brighter than the dazzling radiance of incandescent metal) : his distance from the earth as determined by the equation of light . . .

. . . his mountains of flame which thrust upward into infinity : the fantastic shapes of his eruptive prominences (solar-lizards sun-dogs sharp crimson in color) : his brilliant spikes or jets, cyclones and geysers, vertical filaments and columns of liquid flame : the cyclonic motion of his sports : his volcanic restlessness : his contortions : his velocity of three or four hundred miles an hour : his coronoidal discharges : his cyclonic protuberances, whirling fire spouts, fiery flames and furious commotions : his tunnel-shaped vortices : his equatorial acceleration : his telluric storms : his vibrations : his acrobatics among the clouds : his great display of sun-spots : his magnetic storms (during which the compass-needle is almost wild with excitement) . . .

Again, Crosby’s wizardry with lists is evident here, as is, more obviously, his obsession with The Sun.

“Madman” was first collected in Mad Queen (1929), of which fewer than 150 copies were printed.  That same year, Crosby published the poem as a miniature book titled The Sun, in an edition of 100 copies.  “Miniature” here is no exaggeration: the book measures 1" by 3/4" and the poem is printed in 3 point type, meaning each letter is about a millimeter.  Crosby’s book has been featured a couple times on the internet this year.  In February, a post quoted the New York Public Library’s Curator of Rare Books, who said The Sun is that august institution’s smallest book and that he needed both a magnifying glass and a reading glass to read it (click here to see the post, and photos of the book).   More recently, Fodor’s Travel featured The Sun in a list of “Tiny NY Sights” that should be overlooked (click and scroll down to number nine).  This is dang fine for a poem and book now 90 years old. 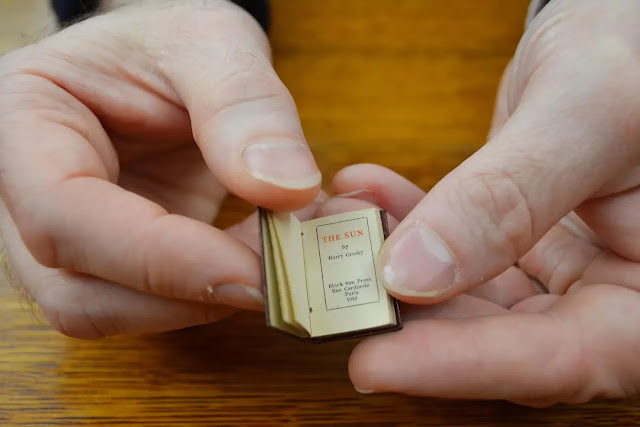 I love that Crosby made a book about The Sun as small as The Sun is huge. That inverse treatment of the subject is poetic – pure poetry to me.  This all makes it more of a shame that it Chasing the Sun fails to mention it.

I’m not sure why Chasing the Sun author Cohen didn’t mention “Sun-Testament” and “Madman” (aka The Sun).  Surely, a half-sentence about each could have been included.  Unfortunately, it may be that Cohen may not have read or even known of these two brilliant works: his footnotes only cite works about, not by, Crosby.  Whatever the reason, the omissions are unfortunate.  The presentation of Crosby’s poetic obsession with The Sun is dim where it should blaze.