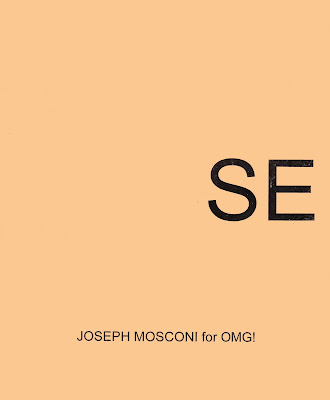 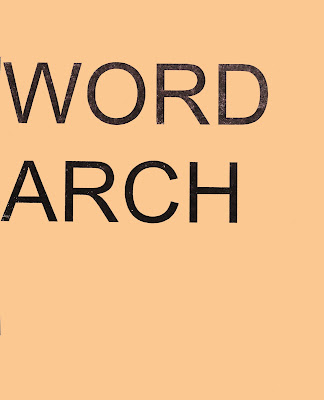 Joseph Mosconi
Word Search
([no place]: OMG!, 2010)
[100 copies, issued with a custom-printed pen]
[7" x 8.5", stapled wraps]
[the image above combines the rear (to the left) and front (to the right) covers]
Folks who do nutty things for poetry pretty much go straight to the top of my list. And at the tippy-top are those who do the particularly nutty, the vivaciously off-beat. I’m talkin’ ‘bout hey-now! (hey-now!) / hey now! (hey now!) / iko-iko un-day / jock-a-mo fee-no ai na-nae / jock-a-mo fee-na-nae, to borrow a phrase.

And so I today give a full-on iambic shout o’ joy, and a special “Exuberance is beauty” commendation, to Joseph Mosconi and his Word Search, published in late July by OMG!. How’s this for nutty-beautiful: Mosconi in his book takes a (what else could it be?) deep (deep) love for the poetry of Robert Creeley and makes eighteen poems, each of which is a word search puzzle that contains the words of a particular Creeley poem.

Yes, you read me right: poems as, that are, word search puzzles, as in the kind commonly found in newspapers, magazines, and books, as well as in kids’ educational materials.

I don’t know if Mosconi did up these poem-puzzle-homages by hand or machine (I assume it’s the latter), but it doesn’t matter. What a nutty-beautiful idea, not the least because these things are hot (and challenging) fun in the summer-time! Here’s a scan of the first poem in the book, Creeley’s iconic “I Know A Man”: 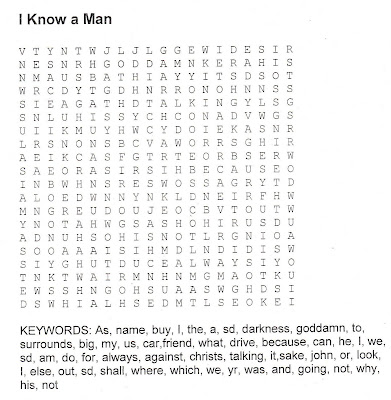 And there it is! A grid of 400 letters, with the 52 words of Creeley’s poem (counting the ampersand which here is converted to a lettered “and”) listed in random order at the bottom, and each one – yes, I can confirm, having solved it, with the help of my wife – findable in the puzzle, where they run letter-by-letter on the horizontal, vertical, or diagonal, and of course (in the manner of these puzzles) forwards or backwards.

This is an homage that hones serious attention on the language of the poem (click here to see it as written by Creeley). The first thing I did was look at the Creeley poem, to collate its text with Mosconi’s key words, to make sure it was all there (it is). And then, to solve the puzzle, my mind took in, gave thought to, every dang word of “I Know A Man” – from the big moody ones like “darkness” to the key verbs, contracted (“sd”) or not (“drive”) to the slangy edgy adjective (“goddamn”) to the pivotal prepositions (“against”) to the pronouns (also contracted and not), conjunctions, and articles, definite and indefinite.

In fact, as these puzzles go – and I must admit they are hard for me, and the one above took me a couple separate attempts – a total of more than an hour (plus as mentioned the help of my wife) – to fully solve (see image below, following the end notes at the foot of this post) – the smaller words can be the toughest. And so it was that the single “the” in Creeley’s poem, along with “else,” were the freakin’ last words spotted. They both run backwards on a diagonal, and may you have as much fun as Mary and I did finding them. But I’ll tell you what: next time I read or hear “I Know A Man,” those two words are going to pop like they never did before!

And of course, solving the puzzle not only puts the words in mind, but also each letter of each word. A standard technique for these things is to focus on any one particular letter in the grid, and then look first to the (up to eight) letters that surround it, to see if the combination forms or beings any of the searched-for words. As such, these poems can be enjoyed as a tip of alphabet to the principles of Lettrism.

And further of course, in its squared entirety, this here is a kind of visual poem too.

Although most of the poem-puzzles in Word Search are, in terms of complexity, roughly equivalent to “I Know A Man,” some are considerably tougher. “The Pool,” for instance (Creeley’s poem begins, “My embarrassment at his nakedness”) packs 120 words into its grid. Holy hide-and-seek!

Mosconi’s Word Search, unless the reader photocopies its pages, also fits into that small category of poetry books (I think here of Steve McCaffery’s Carnival, Panels 1 and 2, which can be fully read only by tearing out each volume’s perforated pages) that are more-or-less destroyed by doing what the poet wants the reader to do. Mosconi and his publisher even help the “it must die to live” process: every copy of the book ships with a custom-made pen, on which is imprinted the first six words (“Write a giggly ode about / motherfuckers...”) of Creeley’s “Citizen.”

The custom-printed pen issued with Word Search
“Giggly ode” is maybe the best way to describe these poem-puzzles, as in, once again, goofy-fun. But wouldn’t it be great if one of Mosconi’s Creeley things somehow made it into the back of one of those airline magazines “in the seat pocket in front of you”?

Speaking of goofy fun – and I am very serious about the following, natch – I strongly endorse Johan Huizinga’s idea, in his classic Homo Ludens: A Study of the Play Element in Culture (1944, English translation 1949), that the “close connections between poetry and the riddle are never entirely lost” and that “[t]o call poetry, as Paul Valéry has done, a playing with words and language is not metaphor: it is the precise and literal truth.” Mosconi’s Word Search proves again the wisdom of those theses!

And so poem-riddle me that, Batman!

Mosconi’s “I Know A Man” is also another modern-day translation of Creeley’s poem; I’ve previously written here about two others, by Rachel Loden and Douglas Rothschild, respectively (click here).

“Many may claim to have fathered the first modern word search puzzle consisting of a letter grid and word list. Pedro Ocon de Oro invented one he called “Soup of Letters” around 1960. Norman Gibat seems to be the first English word search generator. In 1968, he created a 20x20 puzzle of city names appearing in each direction and with overlapping letters. Teachers then began using word search puzzles to encourages learning. [ . . . ] Word search popularity continued with puzzles appearing in many forms including puzzle books, menus, magazines, newspapers, cell phone applications, computer games, and online in many web sites.”

Joseph Mosconi, according to what I find on the web, is a linguist based in Los Angeles. He co-edits (with Rita Gonzalez) Area Sneaks, a journal of poetry and visual arts, and co-directs the Poetic Research Bureau in Northeast Los Angeles. Mosconi’s pamphlet of visual poetry, But On Geometric, was published earlier this year as Parrot 4 by Insert Press (click and scroll down to see). Four sections from Mosconi’s “Personal Affects,” an ongoing poetic sequence that uses language drawn from obituaries in the Los Angeles Times, can be read by clicking here. 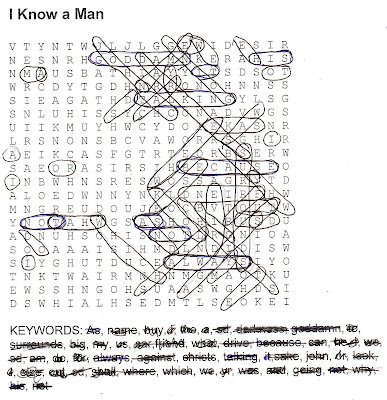 how are you? could you please email me at andrewtopel@hotmail.com for discussion of visual poetry? thank you. have a beautiful day.

Love Joseph's book, love yr blog as always. Smart, both of you. Thanks, as ever, for sharing yr thoughts.