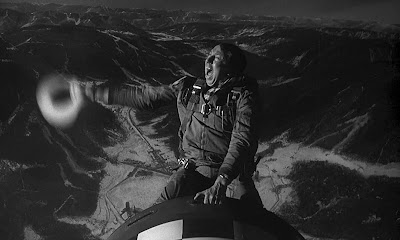 
These two books feature words set by explosive experts. Prose-poems, mostly, packed with high potential thermo-chemical sentences that when detonated by imagination can shatter settled notions of language and the world while offering thrills of the kind usually experienced at a fireworks spectacular. Blert and Backscatter, my friends, will blast yr brains.

The back-story for Blert, explained in a two page end-note, involves author Jordan Scott’s experience as a stutterer. Although this may not exactly square with how Scott tells it, the poetry of Blert seems to have at least three purposes:

1. Relay, poetically, something of Scott’s struggle with the stutter, as experienced by him and others;

2. Give readers an idea of what it feels like – really feels like – to have words back up big-time in the mind and mouth; and;

3. Exact a measure of earned vengeance on language for its role in the stuttering, by grabbing words by their throat, putting them into a full-nelson, bashing them against the turn-buckle, and then, having so mastered them, make of those words astonishing accretions of sound, sense, and no-sense compelling as coral reefs in an octopus’s garden.

Here’s a paragraph from the book, picked at random. May I suggest reading it aloud, or at least articulating it in silent-speech? If you do, think of the words and phrases in your head as alliterative-dissonant airplanes, circling in a holding pattern above the LaGuardia of your mouth. Feel the vowels and consonants congest in your laryngeal apparatus:

Here are two more sentences, taken from a paragraph near the book’s end. Dig the sounds, the zounds, the percussive rhythms, the allusions to music (including Sly Stone’s “I Want To Take You Higher!”), the near allusion to song (a Mary Poppins tune at that) via the multi-syllabic, verging on glossolalia term “chincherinchee” (a type of flowering lily), the pair of italicized phrases towards the end that are delirious variations of one another, and the smash-burst action of the verbs paired with wild nouns:

Puke gauze sphagnum and purr: outbreaks will diminish against the chincherinchee festooned on bronchial, you go on go on, urge backwash cha-cha- cha, homily into boomshackalacka like fungi canoodle sequoia: say nosh cricket merengue, your turn, say gnash locust meringue. I blip blip, hijack sasquatch fib and grovel into jungle camo, while you nerf viscera, tryst anemone in the thick of ABCs.

Blert, page 61 (all italics in the original).

It must stun to hear Jordan Scott read Blert aloud. I don’t know where Scott lives these days. But I dream of spending the bucks to get him here to San Francisco, so I and others here might hear him read his book aloud. Why not?

And why not also get Seattle’s John Olson down here to read from his new book? I’ve written at length of my love of Olson’s work – see here – so I was jimmy-jazzed when earlier this year Black Widow Press published Backscatter, an almost 200 page collection of new and selected poems.

The poem selection in Backscatter, from a half-dozen previously published editions plus several new works, is excellent, and the book’s preface is Olson’s extraordinary essay on poetic autonomy and other matters (“gunpowder vowels,” natch, are mentioned). Unfortunately, in the six months since publication, Backscatter has been noticed about as often as gegenschein in a brightly lit city.* Aside from a few lines I posted on the book’s page at Amazon, there’s been only a single review (in the ‘zine The Believer). Two local bookshops here in San Francisco that stock much contemporary poetry – Books and Bookshelves and Bird and Beckett – put Backscatter on their shelves, but the copies are still there, waiting on a lover.

Two of the new poems in Backscatter deserve special mention. “Kinema” is a three page prose poem centered on Olson’s admonition that you should make a movie. Not a camera and film movie, but one (as Olson puts it near the poem’s end) “right there at the frontier between the external world and the life of the mind . . . .” The idea that the imagination can make one hell of a motion picture is common. Olson’s poem stands out because it persistently posits pulchritudinous plentitudes of possibilities for your mind-movie. Here’s a typical suggestion from the poet-auteur:

put a tornado in it a larynx of dark whirling air an old man affirming an iron hatred in a rocking chair in West Virginia a doorknob wrestling free of a door a watch ticking on a train rail protestors clashing with police a plumber moving to the back of a French restaurant a mirror whistling like a ghost a parachute opening over Damascus the pulse of sedition in a wrist of words the sincerity of earth cough up pennies and mountains Bob Dylan driving a semi light breaking on a rose a man standing on a rock overlooking an alpine lake a blue so intense so extreme it constitutes another world.

Throughout the poem, the suggested scenes and shots relentlessly pile up, one after another, some hard and real (“[t]he punishing evidence of asphalt”), some real but not so hard (“[s]team from a laundry vent whipped, jerked, whirled by the wind”), some hard, real, and trending toward the out there (“a disease called real estate absolved by octaves boiling in the leg of a thundercloud”) and a few just giddy giggle fun (“Tarzan working at a car wash in Mozambique scrubbing SUVs with a loincloth”). [All these quotes from Backscatter, page 156].

Reading “Kinema” reminds me of Andre Breton’s story about how he and his friend Jacques Vache would see movies in Nantes during World War I. The two would go into a theater not knowing what film was playing or when it began. They’d just go in and see whatever was on the screen. When they’d seen enough, they’d leave and rush off to another movie house and do the same thing, and then move on to another, and so on. Breton called the experience “magnetizing” (italics his). So too is reading Olson’s poem. It’s a cluster-bomb of kaleidoscopic images that attract at an elemental level and re-orient the mind to the true north of creative imagination.

Another of the mind-blowing new poems is “The Taste Of Ocher Forth,” a twelve-part, twenty page prose poem. “I’m constructing a dream of words,” Olson writes in the first section, and he arranges hundreds of sentences which for most part must be taken as one would the most oneiric of Joseph Cornell’s box-constructions. Olson’s words are recognizable enough, and so too is the concern in the poem about language and certain philosophical concerns. But just as the familiar can become fluid or torque in dreams, so too the referents and syntax in this poem. “Energy Saturday did bark,” reads one sentence, or, even more plastic, “Absolution raft since length is one husky pummel bolt that need to pump is even what tracks a throat a chatty interlude pushed into all institutions up where the mocha is pressured into since.”

Yet “The Taste Of Ocher Forth” also has moments – also similar to dreams – when word bursts become pyrotechnics of colorful illumination suddenly here then gone. “That ecstasy is lush that dreams itself an egg, ” writes Olson, or “Poetry is the engine we all envy for its episodic onyx and indiscriminate parallels.”

“Never interview an elegant dream,” Olson suggests, and that advice seems wise. This dream-poem’s questions and answers are its own. We readers are but witnesses to the ignition of its high-energy reveries, and that’s mighty fine. We’re crazed Stetson-waving Slim Pickens straddling the poem-Bomb, ecstatically yee-hawing and ooh-ya-hoooing as we free-fall to a massive explosion of otherness.
Posted by Steven Fama at 8:21 PM

wow! Thanks so much...shit...my tonsils are all boing boing with thanks...

would love to chat more.

oh, and I am living in Vancouver these days and would LOVE to visit SanFran...