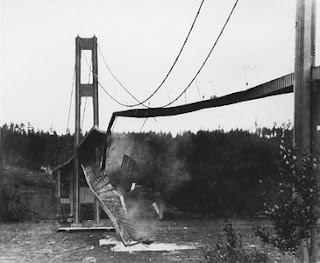 The Ultimate (Deconstructed) Bridge To Nowhere

Introduction: When out in the garden, I enjoy clearing away weeds and overgrowth, and adjusting or adding stepping stones and borders, so as to better showcase the flowers, vegetables, and trees. Such efforts can reveal previously unseen wonders. The same can be true with a text. Prune away words, re-arrange or perhaps add a bit of punctuation, and oh the things that can be seen! Latent messages emerge, language can shine in the full glory of its thing-ness , and humor can bloom. What was vacuous can become vacuous as can be; the calculated and pompous, nakedly and ridiculously so.

I hereby guarantee that except for the title (for which Senator Joseph Biden gets partial credit), all the words that follow were spoken, in the exact order in which they occur below, by Governor Sarah Palin during the October 2, 2008, Vice-Presidential debate. Your humble gardener has cleared away certain weedy and obscuring words, and rearranged or added punctuation, including periods, commas, and paragraphing.

Joe, ya know this bad kids’ soccer feeling? I’ll betcha some fear fear. Fear about a fear, perhaps. That warning bell – the alarm. Referring to the entrenched “mavericks.”

96 proof, you know, get down cravin’ something. Come and I’m happy, darn right. Also though, let's commit ourselves, Joe. Six pack hockey moms across the need and say never again, never do what our parents told us. A heck of a lot never.

Again, kill jobs. Wanna? Ya know, I may.

Not answer. The questions heated up. Ya know the nice thing. Somethin’ else you know I guess. Bless their hearts, ya know, aren’t comin’ kinda a whole lot. Got to.

I would have more revelation made. Aware now. Look back kinda. Toxic mess main streeters like me. My record on energy: a nonsensical position – to tap into tapped into very, very hungry the key. A heck of a lot more than that goin’ on? Yes, well I don't want to argue I want to argue.

Straight up non-support for anything but my answer: a great American hero surge. In fact, even grow our military a white flag of surrender. That’s for sure you guys. Closer and closer.

Who coined that central war? Just downright dangerous finger-pointing backwards ruffled feathers. The be all end all of again. Got to real quick also okay I'd like to just really quickly. Reckless, reckless again. Also in, in also. Different conditions in that different country and conditions are certainly different. Anything opposite of that over there on this have not said anything different but that oh yeah it's so obvious. And you guys here, you now, you who or vice-versa. Cravin’ that straight.

Talk! Hey, tell us why. I beg here again. He knows what evil is: mistakes and blunders, a war (heaven forbid yes that, that!).

What did you expect, a little bit of reality?

Ya know, just get out of my way. Take more, say it ain’t, so there. You go again, again now. Doggone it and god. Bless heaven, right? Got to. Be really ramped up. Shout out, “got to right now it’s near and dear to my heart very, very.”

Got to, I guess of course. No, no, of course, very seriously. Also near and dear to my heart: I want you, I want you. Founding fathers tapping into (yeah!) heartland of America mom. Sit around the kitchen table unapologetic here, making a – really people aren’t looking – party party party party! Diverse coming together tumultuous!

Got to, got to, got to. Not anymore not got, to last. Go-around, for the last change is comin’. Quasi-caved the purse strings zero-base up. And that’s what you do: party!

And even in it’s a, and we all in there also, so just that – you know – at the end of the day as long as okay. Got to and again our, our kill jobs. The record on the table. Saying no to independence. Clear? Well again, without the filter.

Fight. Fight what the hurts are and God too. Fight our freedoms and children in the bloodstream. Fight sunset years. Children children’s children, fight!
Posted by Steven Fama at 8:36 PM